BANDAR SERI BEGAWAN (BERNAMA) - Malaysia's Prime Minister Mahathir Mohamad said he would honour an agreement by the four partners of the Pakatan Harapan (PH) alliance to step down after two years and hand over the country's leadership to Datuk Seri Anwar Ibrahim.

"I am confident that he is now more mature and much experienced," Tun Mahathir said at a gathering with Malaysians residing in Brunei at a hotel on Sunday evening (Sept 2).

He was a replying to a question from a guest who had voiced the worry about history repeating itself on the choice of the successor.

Mr Anwar was sacked in September 1998 as deputy prime minister by Dr Mahathir.

Before the May general election, these parties had agreed for Dr Mahathir lead the country for two years should PH win, before passing the baton to Mr Anwar, 71.

But there has been regular speculation in the last four months that Dr Mahathir, 93, might not keep his end of the bargain, despite denials by both men. 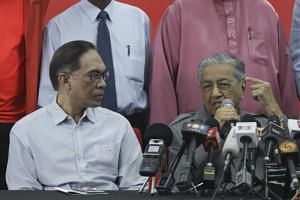 Two-year stint as Malaysian PM only a suggestion and could be longer: Mahathir

Mr Anwar, who is the PKR president-elect, in recent weeks said he hopes to be an elected Member of Parliament by the end of the year. He must be an MP before he can be appointed prime minister by the four-party ruling alliance.

But to be an MP, one of PH's 116 MPs in the federal parliament must first step down.

To another question, Dr Mahathir said much was done to replace the previous prime minister, like holding demonstrations, attempting to move a no-confidence motion in Parliament, lodging police reports and coming up with a People's Declaration rejecting the leadership of Najib Razak, but all to no avail until the people made their stand known through the ballot box.

Dr Mahathir said, on the same note, Malaysians could do likewise if they were dissatisfied with his successor.