The majority polled by both candidates dropped sharply as expected due to the low voter turnout. The turnout was 43 per cent in Balakong and 44 per cent in Sei Setia. These were lower than the 49.8 per cent turnout in the Sungai Kandis by-election in Selangor last month, the first special polls to be held since the May general election. PH retained that seat to, defeating a rival from Umno.

The poor turnout was caused by voter fatigue as the by-elections, the second and third ones in Selangor, were held just four months after the hard-fought general election in May.

The Selangor state assembly, like the federal parliament, is controlled by PH.

The by-elections were held due to the deaths of the two previous PH lawmakers, one due to a vehicle accident and the other due to cancer.

A major feature in the twin by-elections was how some leaders of the Malaysian Chinese Association (MCA) - a member of the opposition Barisan Nasional coalition - had appeared beside leaders of Parti Islam SeMalaysia (PAS) in the campaign, with Umno acting as broker. 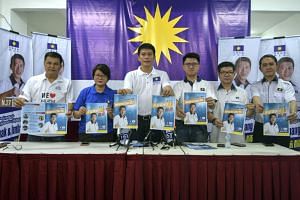 Umno will not contest in a third Selangor by-election, signalling new political amity

The MCA had over the years denounced fellow opposition party PAS for pushing a narrow Islamist agenda, but had to rely on both its BN partner Umno and PAS to gain Malay votes in Balakong.

In Seri Setia, Umno stood back and allowed PAS to contest in a one-on-one fight against PH.

Leaders of Umno and PAS, both Malay Muslim parties, say the electoral understanding in these by-elections could lead to a broader informal agreement in Parliament and in other by-elections.

In the May general election, the late DAP candidate won in Balakong with a majority of 35,538.

In Seri Setia in May, the late PKR candidate defeated PAS and a BN with a majority of 19,372 ballots in Seri Setia.