The president-elect of Parti Keadilan Rakyat (PKR) said however he had yet to decide which parliamentary seat he will contest in order to be elected an MP.

"Three to four people have offered (to give up) their seats and we will discuss that further.

"I am looking at October when (Minister of Economic Affairs) Azmin Ali will table the 11th Malaysia Plan mid-term review so I can go through it and comment as an MP," he said after closing the "The Future of the Bumiputra and the Nation Congress 2018" on Saturday (Sept 1).

The former jailed leader was granted a pardon from the King in May, days after the Pakatan Harapan pact won the general election, paving the way for his return to the political arena.

The PH coalition had agreed before the general election that Datuk Seri Anwar will take over as Prime Minister from Tun Dr Mahathir Mohamad in two years' time.

Ex-deputy prime minister Mr Anwar was first imprisoned in 1999 for corruption, after being sacked by Dr Mahathir in 1998. The former foes banded together in 2016 to oust the Barisan Nasional government led by Najib Razak. 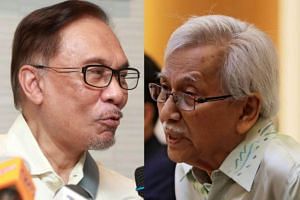 When told that the month of September marked 20 years since he was sacked from government, Mr Anwar said his cooperation with Dr Mahathir was "extraordinary and unprecedented".

"History shows that the animosity between us was bad - but it was fated that we are working together again to save the country from abuse of power.

"I am very grateful despite all the suffering and I don't think that this is an issue now.

"We are here to support Dr Mahathir and to give him the space and latitude to lead," he said.