PETALING JAYA (THE STAR/ASIA NEWS NETWORK) - Malaysian Prime Minister Mahathir Mohamad has said that his stint at the premiership could be extended beyond the two years previously stated, emphasising that it was only a "suggestion".

While he acknowledged that two years was the initial decision, following which he would hand over to Datuk Seri Anwar Ibrahim, the de facto leader of the Parti Keadilan Rakyat (PKR), Tun Dr Mahathir said this was not set in stone.

The PKR is part of the four-party ruling Pakatan Harapan coalition led by Dr Mahathir.

"It (the two years) is a suggestion, but we are not fixed on this. It could be earlier, or even later," he said.

"The priority is to return the nation's wealth and build our economy to become more sustainable he said in an interview with Sinar Harian published on Saturday (June 9).

"In the short term, I want to overcome the problems we are facing now," he said. "If I succeed, money won't be an issue, what will matter is the result of our work."

But he was quick to reiterate that Mr Anwar would be his successor. 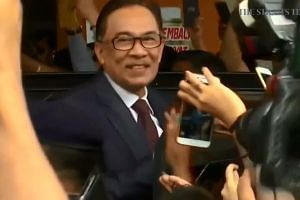 Mr Anwar, who was Pakatan Harapan's choice for prime minister even before the general election, received a full pardon on May 16.

The contentious past between the duo had led to doubts on whether Dr Mahathir would make way for Mr Anwar, despite assurances by both that it would happen.

Mr Anwar was once Dr Mahathir's protege and deputy prime minister, but was unceremoniously sacked in 1998 and convicted for sodomy and corruption.

In the interview, Dr Mahathir also denied any involvement in Mr Anwar's incarceration, saying it was the police who had enforced the rule of law.

"Anwar's case was not my doing. The police said 'oh, a deputy prime minister cannot be like that, for us to ignore whatever he does'," he said.

"If we want to go follow the rule of law, we must let the law take its course even if our friend is implicated," he added.