PETALING JAYA (THE STAR/ASIA NEWS NETWORK) - The Malaysian government has been getting flak from worker unions for saying that minimum wages will be raised by just RM50 (S$16.60) a month to RM1,050 from January 2019, amid demands that these should be hiked to at least RM1,500.

Prime Minister Mahathir Mohamad on Friday (Sept 7) defended the national minimum wage hike, saying the government can ill-afford to give more now, as it had massive debts with high interest rates to pay.

The minimum wage of RM1,500 was one of the promises of the Pakatan Harapan (PH) government in its election manifesto, with government leaders now saying it will take several years before wages can reach that level.

"However, we are currently in a difficult time and most of our money is used to service huge debt," Tun Mahathir told reporters after chairing a meeting of the PH leadership council.

The government has said that the previous administration left behind RM1 trillion in debts.

The Prime Minister's Office said in a statement on Wednesday that Malaysia would have a uniform minimum wage of RM1,050 per month or RM5.05 per hour, across the country, beginning Jan 1, 2019. 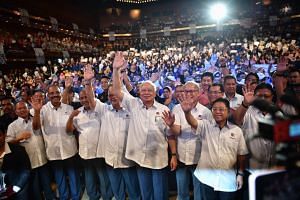 Malaysia's economic fortunes lie in the hands of these 5 people

The statement said the decision was made following recommendations by the National Wage Consultative Council.

The small increase drew flak from the Malaysian Trades Union Congress (MTUC) and even several PH lawmakers, with some saying that it was an insult to the 14 million strong workforce who had supported PH in the last general election.

Said MTUC secretary-general J. Solomon in a statement on Thursday, the RM50 raise was a pittance dumped on labour.

"Malaysian workers in this country have been suffering since the late 1970s," he said. "We voted out the former government with the hope of having a government that would understand the predicament of the B40 (bottom 40 per cent) population."

Defending the government's move, PM Mahathir said Malaysia could lose its competitive edge with other countries in the region if the minimum wage was increased too much.

"We also have to remember we are competing with other countries, and if the cost is too high, we might lose our competitive edge," he said.