NEW DELHI • The initial public euphoria in India over the air strikes against Pakistan has dissipated somewhat with the release of a captured Indian Air Force pilot by Islamabad.

But, mostly, support for the decision to strike against terrorists has remained steadfast.

"It was good what happened. Our people keep getting killed. Everybody I know is saying this was a good move by India. We are not going to solve anything with Pakistan with love. Talks will not help," said Delhi taxi driver Ravinder Singh, 49, who added that this was the prevalent view among his friends and colleagues.

Mr Dev P Gulati, 80, a consultant engineer in the petrochemical industry, said: "I belong to a place in Pakistan called Sialkot. I saw the Partition (of India and Pakistan) when I was (a child). So I support the government in its action against Pakistan."

Most opposition parties had also expressed support for the Narendra Modi government's tough stance on Pakistan and its decision to carry out the air strikes.

Still, they accused the ruling Bharatiya Janata Party of "blatant politicisation of the sacrifices of the armed forces", accusing the Modi government of building a political campaign around the air strikes for the forthcoming general election in April and May.

Some politicians, like Ms Mamata Banerjee of the Trinamool Congress, pushed for more details on the targets struck. 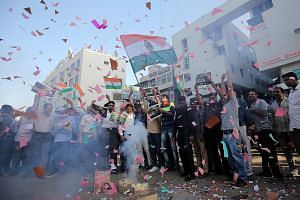 India and Pakistan have had a tempestuous relationship since independence from the British in 1947, when Pakistan was carved out of India.

In India, strong sentiments remain against Pakistan, particularly in the northern part of the country, where the trauma of a bloody partition was felt keenly, with the death of more than a million Hindus, Muslims and Sikhs.

There is also exhaustion and anger within India over the multiple terror attacks it has suffered over the last couple of decades, mostly traced back to Pakistan, including the 2008 Mumbai terror attacks when terrorists hit multiple targets and killed 166 people.

No surveys have been conducted on the public mood following the latest terror incident, but it is apparent that there is widespread anger over the death of 40 soldiers in the Feb 14 attack in Pulwama in Kashmir.

They were killed in a suicide bombing for which the Pakistan-based Jaish-e-Mohammed (JeM) took responsibility. JeM is a militant group founded by Maulana Masood Azhar, who is in Pakistan.

The Pulwama incident has led to an outpouring of nationalistic sentiment across India.

Television channels called for revenge and supported the Indian airstrikes.

One anchor of a Telugu TV channel in Andhra Pradesh went so far as to appear dressed up in military fatigues and holding a toy gun during coverage of the escalation in hostilities between the two sides this week.

But, amid the clamour, there were also calls for peace, with #saynotowar being used by many Indians urging caution as the tensions rose.

Some Indian newspapers also urged caution and appealed to the government to use diplomacy.

The Telegraph, an English-language newspaper based in the state of West Bengal, noted in an editorial on Thursday: "Sustained military exchanges would destabilise the South Asian region. The international ramifications would also be significant, jeopardising strategic interests and, possibly, the economy.

"India should work the diplomatic lines to direct international pressure on Pakistan to sever its ties with jihadi (terrorist) elements."

A version of this article appeared in the print edition of The Straits Times on March 02, 2019, with the headline 'Appeals for restraint amid nationalism'. Subscribe
Topics:
More
Whatsapp Linkedin FB Messenger Telegram Reddit WeChat Pinterest Print Purchase Article Copy permalink