Indian Air Force pilot Abhinandan Varthaman who was captured by Pakistan, crossed over into India to a hero's welcome yesterday.

His release came amid signs of de-escalation of tensions between India and Pakistan.

Mr Varthaman, whose videos in captivity released by Pakistan went viral on social media, crossed into Indian soil via the Attari Wagah border checkpoint between Pakistan and India.

Crowds had started gathering at Wagah on the Indian side early yesterday, and Indian TV channels had been doing live reports in anticipation of his release.

Sources said the procedures for the handover had delayed his release for a while.

Pakistan Prime Minister Imran Khan said on Thursday that his country would release the pilot as a gesture of peace to reduce tensions with its neighbour.

The return of the pilot, who was caught by local villagers after his plane crashed on Wednesday, became the focus of hostilities between India and Pakistan.

The return of the pilot, who was caught by local villagers after his plane crashed on Wednesday, became the focus of hostilities between India and Pakistan.

"We are happy our pilot... is being released. We are extremely happy to have him back," said Air Vice-Marshal RGK Kapoor on Thursday.

Still, there were reports of shelling continuing along some parts of the de facto border. 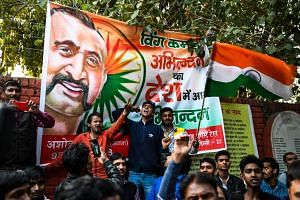 Hostilities between India and Pakistan, which have fought three wars and a limited conflict, rose again after India launched air strikes against what it said was a terror camp belonging to the Jaish-e-Mohammed (JeM) in Pakistan.

This was in retaliation for a bombing in Kashmir that killed 40 paramilitary soldiers.

JeM had taken responsibility for the attack in which a suicide bomber drove an explosive-laden car into buses carrying Central Police Reserve Forces soldiers.

Matters appeared to spiral out of control when Pakistan launched an air strike which resulted in a dogfight between the air forces of India and Pakistan.

Planes were shot down and the Indian pilot, who crashed in Pakistan, was taken into custody.

The United States and other countries had a role in trying to defuse tensions. US Secretary of State Mike Pompeo is reported to have said: "I spent a good deal of time on the phone last night talking to leaders in both countries, making sure there was good information exchanged, encouraging each country to not take any action that would escalate and create increased risk."

United Arab Emirates Crown Prince Sheikh Mohamed bin Zayed revealed in a tweet that he had made calls to Indian Prime Minister Narendra Modi and Mr Khan, stressing the "importance of dealing wisely with recent developments".

The Indian government had said it had hit a JeM terror camp, while Pakistan said Indian jets hit open space. Pakistan had maintained that payloads were released into open space and that there were no casualties.

"We have the right to know how many people died in the air strike and who were they," said Ms Mamata Banerjee of the Trinamool Congress.

Analysts, however, said that the goodwill gesture relating to the release of the pilot would not lead to India softening its position on action against terrorism or on dialogue.