“PAF shot down two Indian aircraft inside Pakistani airspace,” tweeted military spokesman Major General Asif Ghafoor, adding that one aircraft had fallen in Pakistani-held Kashmir, while the other crashed on the Indian side.

Maj Gen Ghafoor claimed that two Indian pilots had been arrested, while the third one had been injured and was in hospital receiving treatment.

Indian Ministry of External Affairs spokesman Raveesh Kumar said at a press conference that India lost a MiG 21 fighter jet during the skirmish, with the pilot lost in action. He noted that Pakistan claimed the pilot was in their custody and said the government was ascertaining the facts.

Mr Kumar also said that one Pakistan air force fighter aircraft was shot down by the Indian air force.

Maj Gen Ghafoor said the Pakistani jets had locked on to six targets in a demonstration of their capacity to hit key installations but had deliberately avoided causing any damage.

“We engaged a nearby open space where there were no humans or military installation,” he told a news conference in Islamabad.

At the briefing, Maj Gen Ghafoor produced weapons and identity documents he alleged were carried by the Indian pilots.

Pakistan claims to have shot down Indian jets as tensions rise 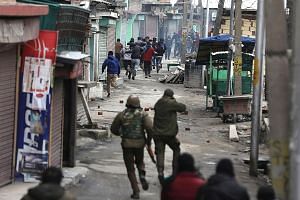 After India's strike on Pakistan, both sides leave room for de-escalation

Videos are circulating on social media that claim to show the arrested Indian pilots in Pakistan’s custody.

In one, the pilot states his name, service number and religion, while in a separate clip, an injured pilot is being transported in a vehicle. Maj Gen Ghafoor said that man was under treatment at the Combined Military Hospital.

Police officials on the Indian side of Kashmir said that two Indian pilots and a civilian had died after an Indian air force plane crashed in Kashmir, but did not confirm if the plane had been shot down by Pakistani forces. However, a Reuters witness that based on a partial tail number from the craft, it was an Mi-17 military helicopter.

Indian police sources said the Pakistani fighters dropped bombs at Nadian, Laam Jhangar and Kerri in Rajouri district and the Hamirpur area of Bhimber Galli in Poonch at around 10.00 am.

"Indian jets can still be seen flying in the area. Local residents say one Pakistani jet was seen in flames across Line of Control, headed towards Laam valley," police sources in Rajouri told CNN-IBN.

But Maj Gen Ghafoor said Pakistan didn’t use F-16 planes in the operation.

Islamabad said it had struck across the Line of Control, the de facto border between India and Pakistan, from “within Pakistani airspace”.

“This was not a retaliation to continued Indian belligerence. Pakistan has therefore, taken strikes at non-military target, avoiding human loss and collateral damage. Sole purpose being to demonstrate our right, will and capability for self-defence,” Islamabad said in a statement.

“If India is striking at so called terrorist backers without a shred of evidence, we also retain reciprocal rights to retaliate against elements that enjoy Indian patronage while carrying out acts of terror in Pakistan,” the statement said.

Addressing the nation after helming a meeting of Pakistan's National Command Authority (NCA), Prime Minister Imran Khan called for cooler heads to prevail and said both India and Pakistan should hold talks.

“Better sense should prevail. We should sit down and talk,” said Mr Khan.

Indian Prime Minister Narendra Modi cut short an address at an official function to rush to a meeting to review the security situation. Mr Modi was replying to questions from youngsters during the National Youth Festival 2019 when he was handed over a piece of a paper by an official, following which he rushed from the venue.

Indian Finance Minister Arun Jaitley was quoted as saying by CNN-IBN: "If the USA can conduct an operation in Abbottabad, then India can also do that," referring to the US operation that killed global terrorist Osama bin Laden in the Pakistani city.

“This is unprecedented territory, we haven’t had tit-for-tat air strikes between India and Pakistan since the 1971 war,” said Mr Anit Mukherjee, a former Indian Army major and assistant professor at the S. Rajaratnam School of International Studies in Singapore, by phone.

“We don’t know what will come from this. But it seems like Pakistan has given a response. And there have been casualties – captures, deaths.”

“We have had this sort of thing happening on the ground for the last 20 years,” Mr Mukherjee added. “It’s basically a shifting of the conflict to the air.”

“They will not allow things to go out of control because both countries are facing tremendous pressure from global powers including China and the US,” said Dr Rashid Ahmed Khan, head of politics and the international relations department at University of Central Punjab, Lahore, by phone. “There will be a controlled and managed escalation.”

CNN-IBN reported that commercial air traffic had been shut down in Chandigarh, Amritsar, Leh and the whole of the state of Jammu and Kashmir, with some flights returning to their cities of origin and others cancelled. Flight operations were also suspended at Dehradun airport.

India and Pakistan exchanged fire along their contested border in Kashmir on Wednesday (Feb 27), a day after Indian warplanes struck inside Pakistan for the first time since a war in 1971, while leading powers urged the nuclear armed rivals to show restraint.

It is the first time in history that two nuclear armed powers have conducted air strikes on each other, while ground forces have exchanged fire in more than a dozen locations.

Tensions have been elevated since a suicide car bombing by Pakistan-based militants in Indian-controlled Kashmir killed at least 40 Indian paramilitary police on Feb 14, but the risk of conflict rose dramatically on Tuesday when India launched an air strike on what it said was a militant training base.

The attack targeted the Jaish-e-Mohammed militant group, which claimed credit for the suicide attack.

But while India said a large number of JeM fighters had been killed, Pakistani officials said the Indian air strike was a failure and inflicted no casualties.

On Tuesday evening, Pakistan began shelling using heavy calibre weapons in 12 to 15 places along the de facto border in Kashmir, known as the Line of Control (LoC), a spokesman for the Indian defence forces said on Wednesday.

"The Indian Army retaliated for effect and our focused fire resulted in severe destruction to five posts and number of casualties," the spokesman said.

Five Indian soldiers suffered minor wounds in the shelling that ended on Wednesday morning, he added.

"So far there are no (civilian) casualties, but there is panic among people," said Poonch district deputy commissioner Rahul Yadav said.

"We have an evacuation plan in place and if need arises we will evacuate people to safer areas," he said.

Local officials on the Pakistani side said at least four people had been killed and seven wounded, though it was unclear if the casualties were civilian or military.

India has also continued its crackdown on suspected militants operating in Kashmir, a mountainous region that both countries claim in full but rule in part.

Pakistan had promised to retaliate over Tuesday's air strikes, and security across India has been tightened.

The two countries have fought three wars since independence from British colonial rule in 1947 and went to the brink of a fourth war in 2002 after a Pakistani militant attack on India's Parliament.

In Punjab, an Indian state that borders Pakistan, security alerts are in place in several districts, according to media reports.

Schools within 5 kilometres of LoC were closed in one district in Kashmir.

In Mumbai, India's financial capital, there was a visible increase in security levels in a city that has suffered numerous militant attacks in the past.

US Secretary of State Mike Pompeo on Wednesday urged India and Pakistan to exercise restraint and avoid an escalation at any cost.

Mr Pompeo said in a statement he had spoken to the foreign ministers from India and Pakistan and “encouraged both ministers to prioritise direct communication and avoid further military activity".

US Secretary of State Mike Pompeo spoke separately with the foreign ministers of India and Pakistan and urged them to avoid "further military activity" following Tuesday's air strike.

"I expressed to both ministers that we encourage India and Pakistan to exercise restraint, and avoid escalation at any cost," Mr Pompeo said in a statement on Wednesday.

"I also encouraged both ministers to prioritise direct communication and avoid further military activity," he said.

Both China and the European Union have also called for restraint.

China called on Pakistan and India on Wednesday to “exercise restraint” and seek dialogue.

“We hope that both India and Pakistan can exercise restraint, take initiatives that are conducive to promoting dialogue, meet halfway and make active efforts for lasting peace and stability in South Asia,” Foreign Ministry spokesman Lu Kang said.

Pakistan has sought help from the United Nations to de-escalate the situation, while India – which is facing national elections in a few weeks – reached out to countries including the US, UK, China, France and Russia and urged the government in Islamabad to take action against terror groups based in the country.

India, Russia and China issued a joint communique on Wednesday after a meeting of their foreign ministers in which they said that extremist groups cannot be supported and used in political and geopolitical goals, and those backing terrorist acts must be held accountable and brought to justice.