India-Pakistan tensions spread to the Organisation of Islamic Cooperation (OIC) after Pakistan decided to boycott a meeting of its foreign ministers in Abu Dhabi yesterday.

Pakistan's Foreign Minister Shah Mahmood Qureshi stayed away because of the presence of his Indian counterpart Sushma Swaraj. India was invited to the meeting by the United Arab Emirates (UAE).

The Pakistani newspaper, Dawn, said Mr Qureshi told his country's lawmakers that he had asked the UAE to "review" the decision but he was told "it would be hard to retract the invitation".

India, meanwhile, took the spotlight at the OIC and used the platform to launch a veiled attack on Pakistan.

"If we want to save humanity, we must tell the states who provide shelter and funding to terrorists to dismantle the infrastructure of the terrorist camps and stop providing funding and shelter to the terror organisations based in that country," Ms Swaraj said at the plenary session of the meeting.

Formed 50 years ago, the Jeddah-based OIC groups 57 member states and describes itself as the "collective voice of the Muslim world".

India, which has the world's second largest Muslim population - after Indonesia - has been excluded from the OIC since its formation in 1969. Yesterday was the first time India had been represented officially at the body. 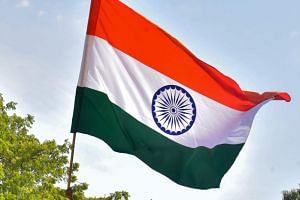 It is a remarkable turnaround for the OIC, which had invited India to be part of the inaugural conference in 1969 in Rabat, in Morocco, but subsequently did not allow any official delegation from New Delhi to participate in the meeting. This was because Pakistan, along with some of its supporters, threatened to pull out of the opening summit if India was allowed to participate.

Since then, the OIC has been used by Pakistan to criticise India, particularly over its role in Jammu and Kashmir.

India has argued that the body has "no locus standi" to comment on India's internal affairs. Yesterday though, New Delhi had some kind words when Ms Swaraj said the OIC "has a key role in shaping our world" and offered to share India's "market, resources, opportunities, and skills".

UAE's decision not to rescind its invitation has been widely seen as a diplomatic triumph for India, whose clout has grown since 1969. India has developed wide-ranging strategic ties with many OIC member countries, including the UAE and Saudi Arabia, in recent years, moving beyond conventional areas of cooperation such as energy and people-to-people links to defence and security.