KUALA LUMPUR - The wife of the sultan of Malaysia's Kelantan state has announced the birth of their first child, a boy.

Ms Oksana, who uses the name Rihana Oksana Petra in her new Instagram account, posted on Tuesday (June 4) a picture of a pair of baby feet, and wrote: "21 May 2019 - the Day, when my life was divided into "before" and "after".

"Everything that I was told about the changes occurring with a woman after the birth of a baby is true.

"This love is special. These feelings are completely new. I am greatful to Allah and my husband for our son.

"Now there are three of us. Thank you for choosing our family, Tengku Ismail Leon Petra Bin Tengku Muhammad V Faris Petra." she said.

The posting was followed by the same remarks in Russian.

Reports of the couple's marriage surfaced six months ago in late-November.

The ruler, 49, married Ms Oksana, 25, in Moscow with pictures and video clips of the wedding ceremony leaked online. 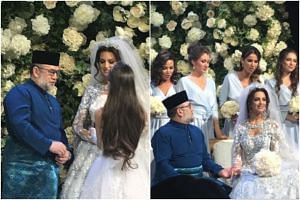 But he stepped down as the Malaysian King on Jan 6 this year - just two years into the five-year reign - without announcing his marriage. He then retired to Kelantan, an agricultural state on Malaysia's east coast facing the South China Sea.

In another Instagram posting, Ms Oksana said she was grateful for the safe outcome of her pregnancy.

"It was the most important and, at the same time, the most difficult period in my life. The last three months of pregnancy I spent in hospitals, staying in bed with droppers in my both hands. I had too many difficulties with pregnancy."

"The support of my closest people and my love for my son and Faith in the best helped me in that not simple time."

"Alhamdulillah for the safe outcome of pregnancy." The posting was accompanied by a photograph of her holding her pregnant belly.

Other pictures on her Instagram account showed the couple at their wedding ceremony and one of her wearing the tudung.