Tipped to be Malaysia's next king, sports-loving Sultan Abdullah is said to be down to earth

Last Tuesday, the country turned its attention to another symbol of the state - the Pahang royal house.

Tengku Abdullah Sultan Ahmad Shah was proclaimed the sixth Sultan of Pahang in Pekan, the state's royal town that is located near the beach. He is now called Sultan Abdullah.

The installation of the 59-year-old ruler puts him in line to become Malaysia's next king under the rotation system practised by the nine Malay royal houses in the country after the sudden abdication of Kelantan's Sultan Muhammad V on Jan 6.

On the streets of Pahang, residents have stories to tell of Sultan Abdullah and his down-to-earth personality.

"I am very proud and happy that His Royal Highness has been proclaimed the new sultan. I'm sure he will do a great job in looking after our well-being," said banana fritter seller Aisyah Mat Idris.

"Whether or not he ends up as king, we're with him," said the 54-year-old, who lives in a village 11km away from the palace. 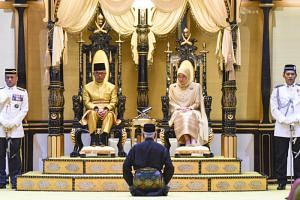 Said 63-year-old fruit seller Ahmad Amin Abu Bakar of Sultan Abdullah: "He would take the time to chat, or even dine with us whenever he has time to spare. He's always around and that shows the kind of sultan he is."

A keen sportsman from a young age, the ruler played football, hockey and sepak takraw at school, and represented the state in football.

"His Royal Highness - like his father - is an accomplished sportsman, particularly in the field of hockey, football and polo," said Malaysian Hockey Confederation (MHC) appeals committee chairman Thavalingam Thavarajah.

"He adds a personal touch to his official duties by participating in some of the events," Datuk Thavalingam added.

Sultan Abdullah's sporting interest would lead him to head several national bodies, including the Football Association of Malaysia, the MHC and the Royal Malaysian Polo Association.

Kuantan petrol station attendant Noraini Arshad, 39, recalled how Sultan Abdullah would randomly pull over his vehicle whenever he is driving about town to play football with kampung boys.

"If I'm not wrong, Sultan Abdullah does not really follow protocols, especially when socialising with the locals. It's not odd at all to see him joining in activities with us," she said.

"They're always the first ones to lend a helping hand whenever some (disaster) happens," Ms Noraini added.

Tunku Azizah is known to be passionate about cooking and started learning how to cook at the tender age of six. She has published two cookbooks.

"I was manja with (close to) my nanny, Mak Namah, and spent most of my time with her in the kitchen. I guess that was when I started my cooking lessons," Tunku Azizah, 58, was quoted as saying by the New Straits Times in an interview published last year.

The royal town of Pekan - about 31/2 hours by car from Kuala Lumpur - is also home to two of Malaysia's former prime ministers, Najib Razak and his father, Tun Razak Hussein.

The town is sometimes called Malaysia's Detroit as foreign vehicles are assembled here - including Mercedes, Volkswagen, Isuzu and Suzuki - before being transported to other parts of the country.

Malaysia's Conference of Rulers - comprising the nine state sultans and four governors in states with no royal families (Penang, Melaka, Sabah and Sarawak) - will hold a special meeting on Thursday to elect the next king.

Only royalty will be allowed to vote for a new king in the Council of Rulers.

The Keeper of the Ruler's Seal at the national palace, Tan Sri Syed Danial Syed Ahmad, has said that the new king will take his oath on Jan 31.