KUALA LUMPUR - Splashed across the front pages of Malaysia's newspapers on Monday (Jan 7) morning was the King's resignation, a first in the nation's history.

From news of the public's reaction to regulations in selecting his successor, Malaysians have been fascinated by the royal's sudden move months after his purported wedding to a Russian beauty queen, Ms Oksana Voevodina, 25.

A commentary by the New Straits Times praised the speed of the royal palace in putting to rest mounting speculation about the King's possible resignation.

Despite the public's current bewilderment, the daily wrote that this shall pass as the country moves on. It emphasised that Sultan Muhammad V "is stepping down, not abdicating as some have put it".

Across the dailies of different languages, the headlines were the same: Sultan Muhammad V had stepped down.

Bernama's article titled "Sultan Muhammad V, a people's King" was picked up by local media outlets. The piece painted the ruler as having a sense of humour and having worked hard to be closer to the people.

His two-year reign had been made most memorable by his opening line at the first post-election Parliament sitting last July, when he made a jibe about an earlier walkout by opposition MPs, quipping: "Please sit down and don't run away."

Malay daily Sinar Harian published a commentary saying that he would be sorely missed for his unforgettable remark that drew laughter from both parliamentarians and the people. That statement went viral as memes were made, T-shirts bearing the original phrase in Malay - "Sila duduk dan jangan lari" - became trendy and even a TV talkshow named after line was launched.

Despite the king's popularity with the people, MalaysiaKini reported that the royal had never intended to be the nation's ruler, quoting Kelantan's chief minister Ahmad Yakob. 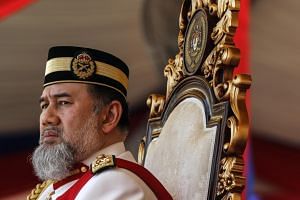 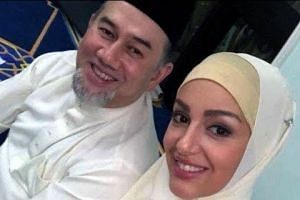 "Since the beginning, Tuanku was not really interested in becoming the Yang di-Pertuan Agong, that was the information (I got) at the time," Datuk Ahmad told the news portal. Sultan Muhammad V is from the state of Kelantan.

Meanwhile, Umno's mouthpiece Utusan Malaysia published an article on the next possible King, stating that it may not necessarily fall upon the current deputy King or follow the rotational system. Citing a constitutional expert, the daily reported that the next King is dependent on the vote by the Council of Rulers.

Ultimately, it appears that the resignation came about as Malay royals sought to protect their own institution, with The Malaysian Insight publishing a commentary on Sunday night.

"Courtiers from among the nine palaces in Malaysia told The Malaysian Insight that the rulers made this unprecedented move to protect the royal institution - already reeling from rising public questioning about their role during the May 9 general election that finally saw Barisan Nasional (BN) lose its grip on power since Merdeka when the pact was known as the Alliance," the news portal wrote.

"The courtiers said in the meetings among the rulers, it was not unanimous but clear that the majority of rulers felt that given all that has happened in last few months, the king had to step down."

The tipping point was Sultan Muhammad V's questionable choice in marrying the Russian, whose past modelling career had raised more than several eyebrows, especially in Muslim conservative Malaysia and more so in Kelantan, where Parti Islam SeMalaysia runs the state government.

On Twitter, while many expressed surprise at the King's resignation, there has been overwhelming support for Perak's Sultan Nazrin Muizzuddin Shah, the deputy and acting king, to be the next King. However, based on the rotational system, Pahang state's monarch Sultan Ahmad Shah is next in queue.