KUALA LUMPUR - The Regent of Pahang will ascend the state throne on Tuesday (Jan 15), the state palace announced on Saturday, paving the way for him to become Malaysia's new king.

The announcement came a day after the Pahang royal council met to discuss the succession given the poor health of the incumbent ruler, 88-year-old Sultan Ahmad Shah.

The sultan had been expected to abdicate in favour of his son Tengku Abdullah, who has been Regent for the past two years. This would put Tengku Abdullah in line to be the next Malaysian constitutional monarch under the rotation system practised by Malaysia's nine Malay royal houses.

An amendment was made to the Pahang constitution to empower the royal council to endorse the Regent's ascension to the throne, The Star quoted the Regent's brother as saying at a special press conference on Saturday.

"It is with sadness that my family and I accept the reality that my father can no longer shoulder the responsibility of being a ruler.

"My family and I proposed that our brother, the Regent of Pahang, be appointed his successor and the sixth Sultan of Pahang."

He said Tengku Abdullah had agreed to accept the responsibility.

After the Pahang royal council meeting on Friday, chants of Daulat Tuanku (Long live the King) were heard three times coming from the Kuala Lumpur hotel room where the meeting took place, The Star reported on Saturday.

When journalists asked Tengku Abdullah, if he would ascend the throne, he reportedly said: "Oh no, you must take one thing at a time."

However, when a reporter congratulated the Regent, he politely said: "Thank you."

Tengku Abdullah and those present at the meeting then posed for a photo. His wife, Tunku Azizah Aminah Maimunah Iskandariah Sultan Iskandar, 58, looked emotional and wiped her eyes a few times, reported The Star.

Tunku Azizah, who is a sister of the current Sultan of Johor,  also hugged her in-laws who are part of the council.

Former prime minister Najib Razak was also present at the meeting. He is one of four Orang Besar Berempat (four major chiefs) of the council. He left before the photo session.

Tengku Abdullah, the eldest son of Sultan Ahmad Shah, has been Regent of the east coast state for two years. He had previously served as Regent for five years, when his father was made Malaysia's King in 1979.

His early education was in the royal town of Pekan, and in the state capital Kuantan. He furthered his studies in the United Kingdom, first at Aldenham School in Hertfordshire and later at Sandhurst, the prestigious royal military academy.

A keen footballer from young, the Regent was President of the Football Association of Malaysia from 2013 to 2017. He has nine children - four sons and five daughters.

Pahang state secretary Sallehuddin Ishak had told reporters after the four-hour meeting on Friday that "any decision" reached that day will be announced at 3pm on Saturday. 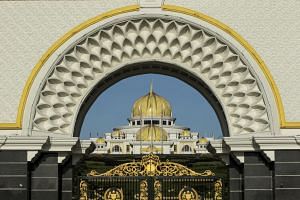 Pahang says royal council decision only out on Saturday, amid speculation over next Malaysian king

The New Straits Times cited sources as stressing that Pahang's royal succession is carried out "to honour the constitutional monarch rotation system".

Royal family members and advisers want to handle the matter “as gently as possible” due to the sensitivity of the matter and Sultan Ahmad’s health, the report said.

“We need to be sensitive, as His Majesty is unwell. We do not want to slight those participating in this process in any way,” said a royal source.

If Pahang declines to take up the throne, the next in line is the ruler of Johor state, followed by Perak.

Malaysia's Conference of Rulers - comprising the nine state sultans and four governors of states with no royal families (Penang, Melaka, Sabah, Sarawak) -  will hold a special meeting on Jan 24 to elect the next king.

The Keeper of the Ruler's Seal at the national palace, Syed Danial Syed Ahmad, has said that the next Malaysian king will take his oath of office on Jan 31.