TOKYO - Asian leaders have expressed hopes that US President Donald Trump will not jettison but rather deepen strategic alliances that grew in strength under his predecessor Barack Obama, amid growing anxiety over the newly-minted president's pugnacious America First approach.

In the case of Taiwan, which is seen as a renegade province by Beijing, President Tsai Ing-wen said in a tweet that she looked forward to "advancing the friendship and partnership" with the US. China had been angered by an unprecedented phone call between Mr Trump and Ms Tsai last month.

"Democracy is what ties Taiwan and the United States together," she said, while the Presidential Office added in a separate statement that it regards the US as its "most important international ally". Former premier Yu Shyi-kun, who attended the Washington inauguration ceremony, told the Agence France-Presse: "Taiwan-US relations are probably at their best right now."

The flurry of congratulatory messages - also from Japanese Prime Minister Shinzo Abe, South Korean acting President Hwang Kyo Ahn and Indian Prime Minister Narendra Modi, among others - comes as the inauguration ceremony, which took place after midnight Saturday (Jan 21) in many parts of Asia, received live TV and online coverage from across the continent.

But the messages belie a growing sense of unease over Mr Trump's leadership, given his nationalist inauguration speech on Friday (Jan 20).

"For many decades, we've enriched foreign industry at the expense of American industry, subsidised the armies of other countries while allowing for the very sad depletion of our military," Mr Trump had said in his address. "We've defended other nation's borders while refusing to defend our own, and spent trillions of dollars overseas while America's infrastructure has fallen into disrepair and decay." 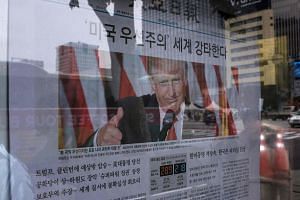 South Korea bracing for challenges ahead in unpredictable Trump era 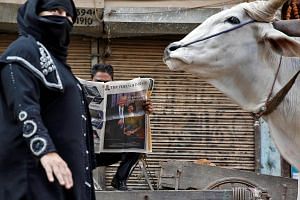 "We will seek friendship and goodwill with the nations of the world - but we do so with the understanding that it is the right of all nations to put their own interests first," Mr Trump added.

The White House said in a separate statement overnight that the US was pulling out of the 12-nation Trans-Pacific Partnership (TPP) free trade deal. This is seen as a blow to Japan's Mr Abe, who has spent considerable political capital championing the pact.

"This indicates the US will no longer be enthusiastic about its global commitment, or in solving others' problems," he said, adding that it could create "strategic vacuums" in many flashpoints around the world, including in the South China Sea, where China is embroiled in territorial disputes with the Philippines, Vietnam, Brunei and Taiwan.

While Mr Trump did not explicitly cite China or Taiwan in his inauguration speech, Chinese Communist Party-linked newspaper Global Times said in an early morning op-ed on Saturday (Jan 21) that China should expect pressure from the US on the issues of trade and geopolitics.

Mr Trump probably wants to expand exports to China, and move some American factories in China back to the US, the editorial said.

It noted Mr Trump's silence on universal values or geopolitics in his speech, but said: "The Taiwan issue is almost certainly a trump card."

"Perhaps his interest is not here," it added, though "it cannot be ruled out that he will use various means without scruples".

Japan, a key US security ally, regards the increasing Chinese militarism in the Asia Pacifc as a prime security threat.

Mr Abe, who was the first world leader to meet Mr Trump nine days after his election on Nov 8, said he hopes for an official meeting at the "earliest possible occasion (to) send a message to the world on the importance of the Japan-US alliance".

The alliance, he said, is the "linchpin" of Japan's foreign and security policies. "I would like to further strengthen the unwavering ties between Japan and the United States, based on the relationship of trust between us."

Mr Trump had previously criticised Japan on the campaign trail for not pulling its weight in the bilateral alliance, and experts say this could put wind in Mr Abe's sails towards revising its pacifist Constitution that was drawn up by the US 70 years ago.

Mr Abe raised the issue on Friday (Jan 20) as he opened the ordinary Diet session, without specifying the articles he was looking at revising. But he is seen as a right-wing conservative leader who wants to make Japan into a "normal country" with more military powers - which could dovetail with Mr Trump's desire for Japan to shoulder a greater defence burden.

Yet another regional threat is a belligerent North Korea. In the South, media reports have cast doubts on whether Mr Trump would be able to deftly resolve the nuclear issue amid recent signs that Pyongyang's nuclear development programme has gained speed.

South Korea's Yonhap news agency said Mr Trump has "put the rest of the world on edge", while JoongAng Ilbo, a Korean daily, warned that "our relations with the US will face a challenge as Trump will most likely call for us to assume a bigger share in the cost of US forces here and a renegotiation of the Korea-US Free Trade Agreement".

English daily The Korea Herald separately noted that the country's "withering economy will be put to the test" after Mr Trump takes office, given a likelihood of protectionist trade policies.

Such a sentiment was also a source of concern for India, where local media pondered whether the US will "continue to be its friend".

The Times of India newspaper noted on its front page that Mr Trump's "aggressively protectionist speech" should "send a chill down the backs of Indian companies - particularly in the tech space - as well as the legions of Indians who have nursed dreams of living and working in America".

Another headline read: "Daddy of dealmakers in, but will he really be India's friend?"

The two countries have grown closer amid Chinese assertiveness in the region, but New Delhi is now worried that Mr Trump's immigration policies will lead to curbs on the H-1B non-immigrant visa programme that is used to send Indian workers to the US. The new US leader said last year he would end the visa programme which he said was "unfair to our workers".

Foreign policy analyst Raja Mohan of Carnegie India said in the Indian Express: "As Trump's America turns inward and redefines its role in the world, India must limit the many negative consequences to its current economic engagement with the United States. At the same time, it must seize the new opportunities for strategic cooperation with Washington by shedding past inhibitions."

Yet others, like former Indian foreign secretary Lalit Mansingh, suggest similarities between Mr Modi and Mr Trump in their personality and approach to politics. He said: "They are both outsiders (to the system), populist in approach and both talk of making their country great. They may have great chemistry."

Over in Thailand, the inauguration ceremony had been covered live by several Thai TV stations, where newscasters provided simultaneous translations and running commentaries of his speech. And in Vietnam, live coverage was absent on TV networks but provided by news websites like Vnexpress, Vietnamplus, Dantri and Tuoi Tre.

The overall tone adopted by countries in Indochina was tentative and neutral, given uncertainties over how Mr Trump will craft his policies going forward and whether his positions might shift when confronted with the realities on the ground.

Myanmar political analyst Yan Myo Thein told The Straits Times: "His speech was highly nationalist and highly focused on the interests of United States. The US president did not mention much on international affairs, so it probably means he will focus on domestic affairs during his term."

In the next four years, he said, "the relationship between the US and Myanmar might be minimal in comparison to previous eight years. And I think the possibility of high level visit (to Myanmar) is less likely".

Political scientist Chaichana Inkawat of Thailand's Ramkhamhaeng University also said that while the US under Trump was inclined to retreat from global politics in favour of its economic goals, it was an untenable position.

"In terms of politics, if America retreats, China will gain and Russia will too. Mr Trump will have to rethink his foreign policy."

Meanwhile, Mr Trump's inauguration sparked small demonstrations in Tokyo and Manila, with the participants unneved by his campaign rhetoric against immigrants and women.

In Manila, hundreds of Filipinos gathered at the US embassy on Friday (Jan 20), accusing Mr Trump of sexism, racism and xenophobia. Ms Joms Salvador, who is the secretary-general of women's group Gabriela, reportedly said: "We are very concerned about Filipino workers in the US dealing with a rise of racism."

And in Tokyo, some 400 people - mostly Americans and a few Japanese - participated in a 4km march on Friday (Jan 20) night, holding placards calling for Mr Trump to respect diversity and women's rights.

"We hope that people will raise their voices to demand fair treatment regardless of gender, the colour of their skin or sexual orientation," participant Katherine Hall, a 49-year-old housewife who has lived in Tokyo for nine years, told The Straits Times.