WASHINGTON (AFP, BLOOMBERG) - President Donald Trump took to Twitter Sunday (Jan 22) to criticise the millions of people across the United States who marched in protests against him a day earlier, including the celebrities who took part.

"Watched protests yesterday but was under the impression that we just had an election! Why didn't these people vote? Celebs hurt cause badly," Mr Trump tweeted, using his personal account @realDonaldTrump.

More than two million people flooded US cities on Saturday in protests led by women opposed to Mr Trump, who many fear will roll back the rights of women, immigrants and minorities.

Less than two hours later, another tweet appeared, which sounded more conciliatory: "Peaceful protests are a hallmark of our democracy. Even if I don't always agree, I recognize the rights of people to express their views."

However, netizens were quick to question if that tweet was sent by someone else on his team.

.@realDonaldTrump Oh thank God someone got to you, sweetheart.

I know @realDonaldTrump didn't write this tweet. He lacks the fundamental ability to be gracious and humble. This is the work of a staffer 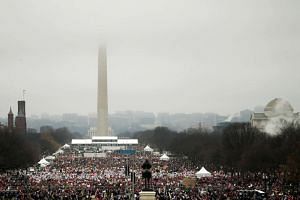 In Pictures: Millions around the world march for gender equality

Hundreds of thousands of people gathered in Washington on Saturday and at coordinated protests against Trump’s presidency in New York, Chicago, Boston and other US cities and towns, as well as in Paris, Berlin, Ottawa and other international locations. The crowds choked subway trains in Washington, where the transit authority said ridership eclipsed that of the inauguration.

The scale of the mass protests, echoed in sister rallies around the world, highlight the depth of resistance to the former reality TV star, two days after he was sworn in as president with an approval rating of just 37 per cent.

Pop diva Madonna made an unannounced appearance on Saturday in Washington, joining hundreds of thousands of protesters who rallied for women's rights in defiance of Mr Trump.