WASHINGTON (NYTIMES) - Crown Prince Mohammed bin Salman of Saudi Arabia told a top aide in a conversation in 2017 that he would use "a bullet" on Jamal Khashoggi, the journalist killed in October, if Mr Khashoggi did not return to the kingdom and end his criticism of the Saudi government, according to current and former United States and foreign officials with direct knowledge of intelligence reports.

The conversation, intercepted by US intelligence agencies, is the most detailed evidence to date that the crown prince considered killing Mr Khashoggi long before a team of Saudi operatives strangled him inside the Saudi Consulate in Istanbul and dismembered his body using a bone saw.

Mr Khashoggi's killing prompted weeks of outrage around the world and among both parties in Washington, where senior lawmakers called for an investigation into who was responsible.

The Saudi government has denied that the young crown prince played any role in the killing, and President Donald Trump has publicly shown little interest in trying get the facts about who was responsible.

Crown Prince Mohammed, the next in line to the Saudi throne behind his ailing father, King Salman, has become the de facto ruler of Saudi Arabia and a close ally of the Trump White House - especially Mr Jared Kushner, the president's son-in-law and senior adviser.

The conversation appears to have been recently transcribed and analysed as part of an effort by intelligence agencies to find proof of who was responsible for Mr Khashoggi's death. The National Security Agency and other US spy agencies are sifting through years of the crown prince's voice and text communications that the NSA routinely intercepted and stored, much as the agency has long done for other top foreign officials, including close allies of the US.

For the past several months, the NSA has circulated intelligence reports to other spy agencies, the White House and close foreign allies about the crown prince's communications. The reports were described by several current and former officials. 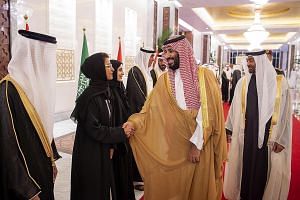 Weeks after the killing, the CIA finished its first assessment about the operation, concluding that Crown Prince Mohammed had ordered it.

The conversation between Crown Prince Mohammed and aide Turki Aldakhil took place in September 2017, as officials in the kingdom were growing increasingly alarmed about Mr Khashoggi's criticisms of the Saudi government.

That same month, Mr Khashoggi began writing opinion columns for The Washington Post, and top Saudi officials discussed ways to lure him back to Saudi Arabia.

In the conversation, Crown Prince Mohammed said that if Mr Khashoggi could not be enticed back to Saudi Arabia, then he should be returned by force. If neither of those methods worked, the crown prince said, then he would go after Mr Khashoggi "with a bullet", according to the officials familiar with one of the intelligence reports, which was produced in early December.

US intelligence analysts concluded that Crown Prince Mohammed might not have meant the phrase literally - in other words, he did not necessarily mean to have Mr Khashoggi shot - but more likely used the phrase as a metaphor to emphasise that he had every intention of killing the journalist if he did not return to Saudi Arabia.

In late 2017, Crown Prince Mohammed ordered hundreds of influential businessmen and Saudi royals - some who had been considered contenders to the throne - locked up at the Ritz-Carlton hotel in Riyadh, the Saudi capital, where they were interrogated.

Days before the conversation with Mr Aldakhil, according to the same intelligence report, Crown Prince Mohammed complained to another aide - Mr Saud al-Qahtani - that Mr Khashoggi had grown too influential.

Crown Prince Mohammed said that Mr Khashoggi's articles and Twitter posts were tarnishing the crown prince's image as a forward-thinking reformer, and the criticism was more cutting because it was coming from a journalist who had once been seen as supportive of his agenda.

When Mr al-Qahtani said that any move against Mr Khashoggi was risky and could create an international uproar, his boss scolded him: Saudi Arabia should not care about international reaction to how it handles its own citizens, the crown prince told him.

Crown Prince Mohammed also told Mr al-Qahtani, according to an official who has read the report, that he "did not like half-measures - he never liked them and did not believe in them".

Days after this conversation and the one about the bullet, Mr Khashoggi wrote his first column for The Washington Post: "Saudi Arabia Wasn't Always This Repressive. Now It's Unbearable." It was a withering attack on Crown Prince Mohammed's crackdown inside the kingdom.

"I have left my home, my family and my job, and I am raising my voice," Mr Khashoggi wrote. "To do otherwise would betray those who languish in prison. I can speak when so many cannot."

Spokesmen for the NSA and the CIA declined to comment. In a statement, Mr Aldakhil said, "These allegations are categorically false. They appear to be a continuation of various efforts by different parties to connect His Royal Highness Crown Prince Mohammed bin Salman to this horrific crime. These efforts will prove futile." Officials at the Saudi Embassy in Washington, contacted on Thursday (Feb 7)  morning, had not commented by 6pm.

In December, The Wall Street Journal reported that Crown Prince Mohammed exchanged numerous messages with Mr al-Qahtani in the hours before and after Mr Khashoggi's killing, citing the CIA's assessment of the Saudi operation.

The Journal report did not give details about the messages, and officials have said that US spy agencies in many cases are able to capture only the date and time of messages - metadata - not their content.

The Journal also reported that Crown Prince Mohammed spoke with associates in August 2017 about luring Mr Khashoggi from the United States to a third country if officials were unable to get him to Saudi Arabia.

US intelligence agencies have identified Mr al-Qahtani as the ringleader of the operation that killed Mr Khashoggi, and last year, he was put on a list of Saudi officials sanctioned by the US for their role in the journalist's death. Mr al-Qahtani is viewed in the kingdom as a brutal enforcer of the crown prince's agenda and has used an army of online trolls to harass Saudi dissidents on social media.

Disappearance of journalist Jamal Khashoggi: The man, the suspects and the scene

After Mr Khashoggi's killing, the kingdom announced that Mr al-Qahtani had been removed from his position as an adviser to the royal court. Saudi Arabia has since begun criminal proceedings against 11 individuals involved in the operation. Prosecutors are seeking the death penalty for five of them.

The kingdom has not released the names of the people on trial, and it is unclear whether Mr al-Qahtani is among them.

Mr Aldakhil, the other aide to the crown prince caught in the intercepts, until recently was the general manager of the Al-Arabiya television network in Saudi Arabia. He is an influential media figure in the kingdom and a prominent adviser to the crown prince.

During the September 2017 conversation, according to intelligence reports, Mr Aldakhil spoke to Crown Prince Mohammed about luring Mr Khashoggi back to Saudi Arabia with the possibility of a job at Al-Arabiya. The crown prince was sceptical that Mr Khashoggi would accept the offer.

Last month, Mr Aldakhil left his post at the network. Saudi news sites have reported that he is expected to be named the next Saudi ambassador to the United Arab Emirates.

US officials said there is no evidence that Mr Aldakhil had knowledge of a specific plan to capture or kill Mr Khashoggi, and his name has never been among the suspects in the killing.

In the weeks after Mr Khashoggi's death, classified evidence piled up that senior Saudi royals approved the Khashoggi operation, even as US officials insisted that there was no "smoking gun" directly tying the crown prince to it.

The narrative from the Saudi royal court changed repeatedly, and the Saudi government has been determined to insulate the powerful crown prince from blame.

In the latest indication that the international uproar over Mr Khashoggi's killing will continue, a UN investigator released a preliminary report Thursday that concluded that Mr Khashoggi "was the victim of a brutal and premeditated killing, planned and perpetrated by officials of the State of Saudi Arabia".