RIYADH • He ran social media for Saudi Arabia's Crown Prince. He masterminded the arrest of hundreds of his country's elite. He detained a Lebanese prime minister. And, according to two intelligence sources, he ran journalist Jamal Khashoggi's brutal killing at the Saudi consulate in Istanbul by giving orders over Skype.

But Mr Qahtani's influence in the Crown Prince's entourage has been so vast over the past three years that it will be hard for Saudi officials to paint him as the mastermind of the murder without also raising questions about the involvement of Prince Mohammed, several sources with links to the royal court said.

"This episode won't topple MbS, but it has hit his image, which will take a long time to be repaired if it ever does. The King is protecting him," one of the sources with ties to the royal court said, referring to Prince Mohammed by his initials.

Mr Qahtani himself once said he would never do anything without his boss' approval. "Do you think I make decisions without guidance? I am an employee and a faithful executor of the orders of my lord the king and my lord the faithful crown prince," he tweeted last summer.

To stem the fallout of the Khashoggi killing, the Crown Prince has allowed Mr Qahtani to take the fall, according to one source close to the Saudi royal court.

Mr Qahtani's biography on Twitter changed in recent days from royal adviser to chairman of the Saudi Federation for Cybersecurity, Programming and Drones, a role he had held before. 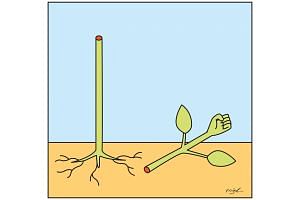 Saudi's powerful Crown Prince seen as covering up Khashoggi's case, but it may backfire

Mr Khashoggi, a US-based Saudi journalist often critical of the Saudi leadership, walked into the Istanbul consulate on Oct 2, to pick up some documents. Turkish security sources said he was then immediately seized by 15 Saudi intelligence operatives who had flown in on two jets just hours before.

According to one high-ranking Arab source with access to intelligence and links to members of Saudi Arabia's royal court, Mr Qahtani was beamed into a room of the Saudi consulate via Skype.

According to Arab and Turkish sources, both men then exchanged insults. But Mr Khashoggi was no match for the squad, which included top security and intelligence operatives, some with direct links to the royal court.

Do you think I make decisions without guidance? I am an employee and a faithful executor of the orders of my lord the king and my lord the faithful crown prince.

At one point, Mr Qahtani told his men to dispose of Mr Khashoggi, saying, "Bring me the head of the dog," a Turkish intelligence source said. The Skype call is now said to be in the possession of Turkish President Tayyip Erdogan.

Mr Qahtani, 40, has been dubbed by some liberal Saudi journalists and activists in blogs and on social media as the Saudi version of former US presidential adviser Steve Bannon for his aggressive manipulation of the news media.

The high-ranking Arab official and Saudi sources with ties to the royal court said Mr Qahtani led interrogations late last year when some 200 people - including Saudi princes, ministers and tycoons - were detained at the Ritz-Carlton in an anti-corruption sweep.

Diplomatic sources said he also led the interrogation of Lebanese Prime Minister Saad al-Hariri last year when he was kidnapped during a visit.