RIYADH • Saudi Crown Prince Mohammed bin Salman has been spending remarkably more time with his father in public since the international condemnation of last month's murder of a US-based newspaper columnist.

They shook hands with Saudis on a tour of the conservative heartland and last week inaugurated a giant industrial park together.

United States President Donald Trump, meanwhile, did his bit to shield the Prince. He has repeatedly avoided laying blame for the Oct 2 killing of Mr Jamal Khashoggi and lauded Saudi Arabia for a sharp drop in oil prices.

With such powerful people in Prince Mohammed's corner, the conventional wisdom may be that he will survive the fallout from the brutal dispatching of a critic.

Indeed, he headed next door to the United Arab Emirates last Thursday for talks with a key ally and looks increasingly likely to attend the Group of 20 summit in Argentina. He is also scheduled to travel to Bahrain and Tunisia.

But there are still many unknowns, and the fate of the young leader is the talk of the town in Riyadh. In conversations among diplomats, Saudis and foreigners working in the kingdom for years, there are two questions everyone keeps asking: Can Prince Mohammed remain the chosen successor to King Salman and - if not - what would happen to the economic and social reforms he has been driving?

It is difficult to determine how senior royal family members, tribal leaders and the security apparatus view the Prince after a series of bungles abroad and repression of critics at home. There could be repercussions from his marginalisation of rival princes as he consolidated his grip on power.

It basically turned his life upside down. He's gone from having the promise of a long career to not knowing what his future is, to uncertainty whether he will be able to rule.

Sentencing to death five of the 11 people charged with Mr Khashoggi's murder may undermine the trust the Saudi security services, a key bulwark against opposition, have in the Prince.

The murder, irrespective of whether Prince Mohammed ordered it or not, has been a game changer, according to Dr Kamran Bokhari, a Washington-based national security and foreign policy specialist with the University of Ottawa's Professional Development Institute.

"It basically turned his life upside down," said Dr Bokhari. "He's gone from having the promise of a long career to not knowing what his future is, to uncertainty whether he will be able to rule."

The Crown Prince marketed himself to the West as the brash young royal who was going to modernise the kingdom and confront Islamic extremism, the man known as "MBS" who embodied the new Saudi Arabia.

His plan to sell a stake in Saudi Arabian Oil Company made him the darling of international bankers.

Now, his future is much less secure. At home, King Salman embarked this month on the first comprehensive tour of the kingdom since he came to power in 2015. 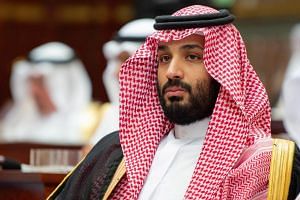 The subtext was to try to repair some of the damage in relations with the religious establishment, tribes and regional princes as a result of his son's policies.

The King, accompanied by Prince Mohammed, started out in Qassim, the most conservative region, promising millions in development projects at every stop.

The Prince's pet project, a futuristic new city in the desert called Neom to rival Dubai, no longer seems to be the priority.

During his annual speech at the Shura Council (consultative assembly), the monarch did not mention the murder of Mr Khashoggi as his son sat stern-faced next to Saudi Arabia's grand mufti, the top religious official.

When asked by CNBC what his message would be to those who say a regime change was needed for Saudi Arabia, Foreign Minister Adel al-Jubeir called the notion ridiculous.

"The leadership of Saudi Arabia represented in the King and the Crown Prince is a red line for every Saudi - man or woman," he said last Wednesday.