WASHINGTON (AFP) - President Donald Trump attacked the investigation of possible collusion between his campaign and Russia as a "political hit job" on Monday (May 21), alleging the CIA and FBI were out of control in probing his team.

A day after demanding the Justice Department probe the FBI's use of an informant in his 2016 campaign, Trump assailed former CIA chief John Brennan as having initiated the investigation into his team's contacts with Russia.

Trump's broadside came shortly before the swearing-in of Gina Haspel as the new director of the Central Intelligence Agency, where he introduced her as "a very special person," uniquely qualified to lead "the most elite intelligence professionals on the planet Earth."

Yet in a series of tweets, Trump lashed out at Haspel's predecessor Brennan, the CIA's head from 2013 to 2017, quoting Fox News commentator Dan Bongino as saying he had "started this entire debacle about President Trump."

"This was a Political hit job, this was not an Intelligence Investigation," Trump tweeted, citing Bongino.

Trump was referring to the exposure of a British-based CIA source over the weekend who reportedly befriended several Trump campaign aides in 2016 to help the nascent FBI probe into Russian election meddling.

On Friday (May 18), Trump said "at least one" FBI representative was "implanted" in his campaign.

On Sunday (May 20), he followed up by demanding the Justice Department investigate whether the bureau infiltrated his campaign for political purposes, and whether it was done at the behest of Barack Obama's administration.

The demand sparked fears of a direct clash with top Justice officials. But concerns eased after the department said its inspector general would examine the issue.

"If anyone did infiltrate or surveil participants in a presidential campaign for inappropriate purposes, we need to know about it and take appropriate action," said Deputy Attorney General Rod Rosenstein. 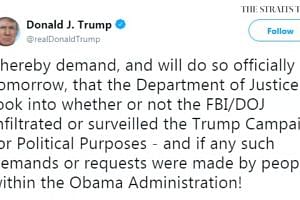 Trump 'demands' probe of alleged spying on his campaign

Trump's tweets were the latest salvo in a mounting White House and Republican effort to weaken Special Counsel Robert Mueller's Russia probe by tarring it as politically motivated, amid concerns the investigation's outcome could eventually fuel an effort to impeach Trump.

With polls showing the electorate is opposed to any move to impeach the president, Republicans believe the issue can play to their advantage in November congressional elections.

Trump lawyer Rudy Giuliani said Sunday that Mueller, who has already issued 22 indictments, wants to finish the investigation by the beginning of September to avoid overlapping with election campaigns.

But that deadline is apparently contingent on Mueller interviewing the president, an issue still unresolved after months of talks.

The Trump offensive against the investigation mounted as The New York Times on Sunday reported previously unknown contacts in 2016 between the president's son Donald Trump Jr., an Israeli media consultant, and a representative of Gulf princes, who were making legally questionable offers to help his presidential run.

One of the focuses of the Mueller investigation is a June 2016 meeting between Trump Jr. and other top campaign officials and a Russia lawyer who had promised them dirt on Trump's election rival Hillary Clinton.

The president dismissed the Times' story and repeated his charge that Mueller's team of investigators is populated by "heavily conflicted Democrats" and people who had worked for Obama.

Meanwhile Roger Stone, a longtime Republican strategist who had an unofficial role supporting the Trump campaign, told NBC News Sunday that he is "prepared" to be charged by the investigation.

"It is not inconceivable now that Mr Mueller and his team may seek to conjure up some extraneous crime pertaining to my business, or maybe not even pertaining to the 2016 election," Stone said.

"It appears to be an effort to silence or punish the president's supporters and his advocates," he added.