WASHINGTON (BLOOMBERG) - US President Donald Trump discussed firing Deputy Attorney General Rod Rosenstein with White House aides on Wednesday (April 11), a person familiar with the matter said, as a chorus of Mr Trump's advisers and allies urged him to thwart the investigation of Russian interference in the 2016 election.

Egged on by some of his strongest supporters, Mr Trump has taken an increasingly combative posture toward Special Counsel Robert Mueller's investigation after FBI agents descended on the office and home of his lawyer Michael Cohen on Monday.

Mr Bannon said that Mr Trump should stop cooperating with Mr Mueller and assert executive privilege to silence aides who might speak with the special counsel - even retroactively, for those who've already been interviewed.

Other supporters of the President made their arguments on television. 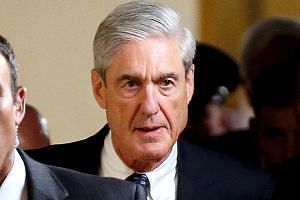 US Deputy Attorney-General Rod Rosenstein may need to recuse himself from Russia probe: ABC News

"They crossed the red line by subpoenaing the Trump Organisation records and doing the raid on Michael Cohen," Mr Bannon told Bloomberg News in an interview. "They're into dark territory now. So let's make this political, shift this thing back to Capitol Hill, take the moral high ground. Let's take a delaying action and give voters an up-or-down vote on Trump in November."

Mr Bannon's plan illustrates the conflicts swirling around Mr Trump following the search of Mr Cohen's properties, which infuriated the President and raised speculation he might seek to fire Mr Mueller, Mr Rosenstein or both men.

While congressional Republicans have warned Mr Trump not to act against the Justice Department, many of Mr Trump's allies outside the White House are agitating for a more aggressive posture.

Mr Trump may be listening. In tweets and public statements since the Cohen search, he has assailed Mr Mueller, calling the Russia probe "disgraceful" and an "attack on our country".

Mr Trump has criticised Mr Rosenstein and Mr Sessions as well, who he has suggested deceived and betrayed him by recusing himself from supervising the investigation.

"The fact is Rod Rosenstein has not done his job. He has not supervised Mueller. This whole thing is an absurdity," former House Speaker Newt Gingrich, another Trump ally, said on Fox News on Wednesday.

It was Mr Trump who appointed Mr Rosenstein to his post, and his removal would trigger a risky and uncertain sequence of events for the President.

Mr Rosenstein's firing isn't a certainty, the person familiar with Mr Trump's discussions said, but rather an idea Mr Trump is mulling given the criticism of the deputy attorney general he has heard from allies, TV commentators and some congressional Republicans.

Several House Republicans led by Intelligence Committee Chairman Devin Nunes of California blame Mr Rosenstein for withholding a Justice Department document that might have sparked the FBI's investigation of contacts between Mr Trump's presidential campaign and the Russian government.

The Justice Department allowed Mr Nunes and other lawmakers to review a slightly redacted version of the document on Wednesday, a move that may have averted an effort by the Republicans to pursue contempt proceedings against Mr Rosenstein and FBI Director Christopher Wray.

"You have to get rid of Rosenstein, maybe Mueller, and Ty Cobb," Mr Bannon said. "Get this into the political process. You can't fight on the Michael Cohen thing every day."

Mr Bannon said that Mr Cobb, who has urged Mr Trump to cooperate with Mr Mueller's investigation, has provided the President with bad legal advice. Mr Cobb declined to comment.

Mr Bannon said he believes that invoking executive privilege would hobble the investigation, shifting it back to Congress, and rally Mr Trump's base voters before crucial mid-term elections in November.

Mr DiGenova also said that Mr Trump should cease cooperation with the special counsel. He spoke on the Fox News show Hannity, a programme Mr Trump promoted in a tweet earlier in the evening. "Big show tonight," he said.

Mr Trump fired Mr Bannon last year and their relationship was further damaged by the strategist's cooperation with a critical book on the President published in January, Mr Michael Wolff's Fire and Fury.

Mr Bannon, who helped lead the Trump campaign to victory in 2016, hasn't spoken with the President about his strategy to cripple Mr Mueller's inquiry, and he would not name the White House officials he has briefed.

His plan was reported earlier by the Washington Post.

Mr Stone told ABC News, "I'm not recommending the firing of Mr Mueller, but I am recommending a housecleaning at his Justice Department."

He told Bloomberg News that he also has not spoken directly with Mr Trump about his DOJ recommendations.

Some of Mr Trump's top advisers, including White House counsel Don McGahn, are concerned that a move to fire Mr Rosenstein or Mr Mueller could prompt mass resignations at the Justice Department and spark a constitutional crisis, the Post reported.

Mr Bannon is sensitive about directly approaching Mr Trump with his proposal to fire Mr Rosenstein because federal investigators could raise questions about those exchanges, the Post reported, citing unnamed people familiar with the discussions.

But Mr Bannon and Mr Trump also have a particularly strained relationship.

Mr Wolff reported in his book that Mr Bannon labelled as "treasonous" Donald Trump Jr and son-in-law Jared Kushner's 2016 meeting with Russian nationals in which the President's son expected to receive dirt on Democrat Hillary Clinton.

Mr Trump has been told by at least one adviser that Mr Bannon's comments in the book are to blame for dragging out Mr Mueller's investigation because the remarks triggered additional interviews with witnesses.

After Fire and Fury was published, the White House pressured Mr Trump's allies to sever ties with Mr Bannon.

He stepped down as executive chairman of Breitbart News after losing the support of the Mercer family, his closest financial patrons, after Mr Trump spoke with Ms Rebekah Mercer by phone.