WASHINGTON (BLOOMBERG) - Michael Cohen spoke with a Russian national who repeatedly proposed a meeting between Mr Donald Trump and Russian President Vladimir Putin in the early months of Mr Trump's presidential bid and offered "political synergy" for the campaign, according to a filing by Special Counsel Robert Mueller's office.

The unidentified Russian, claiming to be a "trusted person" in the country, told Cohen that a meeting between Mr Trump and Mr Putin could have a "phenomenal" impact politically and for Mr Trump's business aspirations to build a Moscow tower, according to the filing.

There is "no bigger warranty in any project than consent of (the President of Russia)", the person told Cohen, according to Mr Mueller's filing.

That November 2015 exchange suggests that outreach between Mr Trump's campaign and Russia was broader and possibly earlier than previously known.

It was disclosed in a slim document that described Cohen's conversations with Mr Mueller's office after he pleaded guilty and agreed to provide information to prosecutors who are investigating Russian meddling in the 2016 election.

The filing accomplished two things. It provided information to the judge in Manhattan who will sentence Cohen next week. But like previous court filings by Mr Mueller, it also offered a window into Mr Mueller's probe, in this case displaying the breadth of his knowledge about interactions between Russians and people close to Mr Trump.

Over the course of seven interviews, Cohen appeared to corroborate key facts already known by Mr Mueller. The one-time personal lawyer to Mr Trump gave useful information about "certain discrete Russia-related matters" that he learnt about during the campaign, they said. 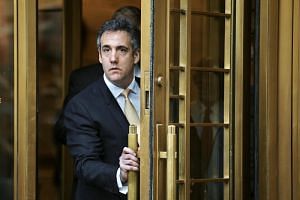 Cohen also told investigators about his contacts with people connected to the White House during 2017 and 2018 - a period when Mr Mueller's investigation was underway.

Agents from the Federal Bureau of Investigation, acting on a referral from Mr Mueller, raided Cohen's residences and office in April 2018.

Cohen has asked for no prison time when he's sentenced next week, citing his assistance to investigators.

Federal prosecutors in Manhattan disagreed. In a separate and sharply worded legal brief, they cited a "pattern of deception that permeated his professional life", said he had committed multiple crimes and recommended "significant time" in prison.

The US Probation Office put that at three and a half years when he's sentenced on Dec 12.

"After cheating the IRS for years, lying to banks and to Congress, and seeking to criminally influence the presidential election, Cohen's decision to plead guilty - rather than seek a pardon for his manifold crimes - does not make him a hero," the prosecutors in Manhattan said in a filing.

Cohen has pleaded guilty in two cases and admitted to nine crimes, including tax evasion, lying to lawmakers and arranging payments to silence women claiming to have had affairs with Mr Trump, to influence the outcome of the 2016 presidential election.

Friday's filings underscore that Cohen waited until after pleading guilty to begin talking in earnest with prosecutors and never reached a cooperation deal.

He appears to have miscalculated at several turns. Publicly, he vowed to "take a bullet" for Mr Trump, but after federal agents raided his offices in April, he appeared to buckle.

In a surprising interview with Mr George Stephanopoulos in July, he said he would do what's best for his family and, pointedly, for his country.

But he may have missed his moment to admit to crimes and cooperate, as another Trump insider, Michael Flynn, had done.

Behind the scenes, the documents indicate, Cohen was slow to admit wrongdoing. It was only after he pleaded guilty in August to campaign finance and other violations that he began providing credible information, the special prosecutor said.

While Cohen took "significant steps" to assist Mr Mueller, prosecutors in Manhattan said he refused to reveal all about his misconduct in New York or help investigators there.

Some of what Cohen told Mr Mueller, who is probing Russian interference in the 2016 election, was detailed in the special counsel's seven-page filing.

For instance, Cohen told the special counsel that in September 2015, shortly after Mr Trump declared his candidacy, Cohen talked to Mr Trump about arranging a meeting with Mr Putin during a United Nations General Assembly meeting. No such meeting took place.

As for the invitation from the well-connected Russian in late 2015, Cohen told Mr Mueller's investigators that he didn't follow up on the outreach.

He explained that he was also talking to another person with connections in the Russian government about the issue at hand - a real-estate project the Trump Organisation pursued in Moscow through the middle of 2016, after Mr Trump had already sealed up the Republican nomination.