WASHINGTON (REUTERS) - The move of the US embassy in Israel to Jerusalem, coupled with the killings of dozens of Palestinian protesters on Monday (May 14), makes the odds of a US-brokered peace even more remote, analysts said.

"Somewhere between zero and none," Dr Martin Indyk, a former US special envoy for Israeli-Palestinian negotiations in the Obama administration, said of the chances President Donald Trump might bring the two sides together and broker what he has called the "ultimate deal".

Israeli troops fatally shot dozens of Palestinian demonstrators on the Gaza border on Monday as the US embassy formally moved to Jerusalem from Tel Aviv.

The embassy move fulfilled a Trump campaign promise but infuriated Palestinians and drew criticism that Washington had undercut its own peace efforts.

"It's hard to see how any Palestinian leader could go back to an American-sponsored peace process" given the embassy move and the Gaza killings, said Mr Khaled Elgindy, a former adviser to the Palestinian leadership now at Washington's Brookings Institution think tank.

"If and when the administration puts forward a peace plan, it is most likely DOA (dead on arrival)," he added, saying Mr Trump had done nothing to calm matters.

"At a minimum, that would require urging the Israelis to stop using lethal force against unarmed protesters."

Rather than calling for restraint by Israel, as both France and Britain did, the United States blamed Hamas, the Palestinian Islamist group.

"Hamas is intentionally and cynically provoking this response," White House spokesman Raj Shah told reporters, adding the United States did not believe the opening of the embassy or the latest violence would affect its peace plan.

Mr Trump has argued that by recognising Jerusalem as the capital of America's close ally, he had "taken Jerusalem, the toughest part of the negotiation, off the table" and formalised realities on the ground.

Israel regards all of the city, including the eastern sector it captured in the 1967 Middle East war and annexed in a move that is not recognised internationally, as its "eternal and indivisible capital".

Most countries say Jerusalem's status should be determined in a final peace settlement and that moving their embassies now would prejudge any such deal.

The Trump administration has said the embassy move does not aim to prejudge Jerusalem's final borders. 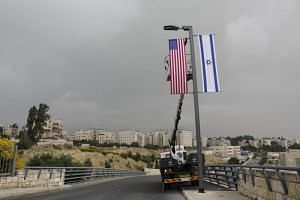 Why is the US moving its embassy to Jerusalem?

But Senator Tim Kaine, the 2016 Democratic vice presidential nominee, told Reuters that "most in the region view the US' position as we're no longer interested in playing the role to broker peace, and that just compounds a lot of despair and it's tragic".

Mr Dan Kurtzer, a former US ambassador to Israel and Egypt who now teaches at Princeton University, suggested Mr Trump's administration could regain some credibility among the Palestinians if it were to pledge to open a US embassy in East Jerusalem, which the Palestinians want as their capital, when a Palestinian state came into being.

"If he says that, then the US is back in business," he said. "What is the likelihood of that?... Pretty meagre."

Washington's regional allies have publicly expressed dismay about the embassy move, but they share a determination with Washington to thwart what they view as Iran's expansionism in the region.

They also count on the United States for their security.

"It's not just that it's provoked violence or that it's made the United States look like the biased broker instead of the honest broker," Dr Indyk said of the embassy move, "but it also has set the process back in a way that all this loose talk about how it's going to advance peace is ludicrous."

"The peace plan will be brought forward at the appropriate time. It can be evaluated on its merits," said Mr Shah, the White House spokesman.

But it had drawn widespread scepticism even before the latest developments. The Palestinians have boycotted the process since Mr Trump's Jerusalem announcement in December.

Dr Indyk said the decision "hasn't advanced peace at all".

"The idea that... it's going to convince the Palestinians that now they should come back to the table is a fundamental misrepresentation of what they've done," he added.

"They've driven the Palestinians away from the table and given them the excuse not to come back."