NEW YORK (WASHINGTON POST) - After swimming one day at the Chelsea Recreation Centre in New York, Allison Goldstein noticed that the walls in the shower were starting to buckle inward.

"It looked like a giant air bubble was pushing out of the wall," the Jersey City resident said. "Over time, the section where the wall met the ceiling started to peel back, and lo and behold, there was some delicious-looking brown and black sludge back there."

Granted, this is an extremely visual example of the grossness that can grow in gyms. But out of sight shouldn't be out of mind when it comes to working out in public places.

Studies have found that the surfaces of treadmills, weight machines and other typical gym equipment are teeming with bacteria and other infectious germs.

Here's how to lower your exposure to the most dangerous and prevalent germs without freaking out so much that you stop going to the gym.

If asked where you're most likely to encounter infectious agents such as staphylococcus (a.k.a. staph, responsible for a range of potentially fatal infections) or salmonella (which infect the intestinal tract), you would probably think of public bathrooms, hospitals or office kitchens. You might be surprised to learn just how many germs are in gyms, where you go to get healthy, not sick.

Consider research published in 2014 on fitness centres in Memphis. Staph bacteria were found on the surface of every piece of exercise equipment tested, including free weights, weight machines, ellipticals, stationary bikes and treadmills. In all, 25 types of bacteria were found in the four gyms tested. In this study and others, staph stands out as the bacteria with the most potent prevalence-danger combination.

A 2019 study of 16 gyms in north-east Ohio focused on one strain of staph bacteria, S. aureus, and its variant, methicillin-resistant S. aureus (MRSA), which is resistant to antibiotics and is estimated to result in 11,000 deaths a year in the United States. Of 288 samples taken in the gyms, 38 per cent contained S. aureus. Medicine balls (62.5 per cent), CrossFit boxes (also 62.5 per cent), weight plates (56.3 per cent) and treadmill handles (50 per cent) were the most common sites. Of areas tested, toilet handles had the lowest incidence, 18.8 per cent. 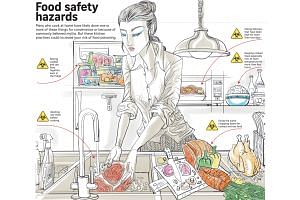 Preparing a meal? Watch out for germs

ST Scroll Back: Phone, toothbrush and ice for drinks dirtier than toilet

How does bacterial presence in gyms compare to other public settings?

"I would say these rates are potentially higher or on par with most surface contamination," says Mark Dalman of Kent State University, the lead researcher on the Ohio study.

One reason: S. aureus and other bacteria thrive in "warm, moist, nutrient-plenty areas," Dalman says. Combine that with their ability to withstand what researchers call "high saline environments" and the rest of us call pools of sweat, and it's not surprising that bacteria like hanging out in gyms at least as much as exercise addicts do.

If this makes you want to swear off gyms for good, here's a little perspective.

"We are a symbiont of bacteria, fungi and human cells all hanging out together," Dalman says. Indeed, a third of the population carries S. aureus; most people become aware of it only when their immune system is compromised or they have surgery.

Although a 2006 study found viruses on almost two-thirds of hand-contact surfaces in a military gym, most were rhinovirus, the main source of the common cold. A Canadian study found that rhinovirus placed on surfaces in a 50 per cent humidity environment (typical for gyms) can begin to disappear within minutes. Combine that with the fact that rhinovirus is usually transmitted person to person, and your chance of catching a cold at the gym is low - unless you're in a class full of sneezers.

Also, though the high prevalence of bacteria in gyms certainly suggests the possibility of widespread infection, there are no data showing a direct cause-and-effect relationship between gym attendance and illness in individuals, says Nabanita Mukherjee of the University of Memphis, who led the Memphis gym study. That was the case when she published her research, and it has remained the case since.

Researchers have found a suggestive relationship between gyms and infection. For example, after an outbreak of MRSA in rural Alaska in 2000, a study found that infected people were three times as likely to have used an MRSA-colonised sauna than healthy people. The association was particularly strong, researchers wrote, because more than 60 per cent of the skin infections were below the waist, and 20 per cent were on the buttocks. MRSA infections are generally distributed equally between the arms and legs and rarely occur on the buttocks.

Mukherjee and Dalman agree that a little effort can go a long way toward reducing your risk of infection. For your and others people's sakes, clean all equipment before and after you use it with the gym's provided materials, either wipes or sprays. (Remember from above that "all" includes non-machinery equipment such as medicine balls and dumbbells.)

Bacteria are easily transmitted by hand, so try not to touch your eyes, mouth and nose with your fingers or palms while in a gym. Do any mid-workout wiping with the back of your hand.

SIT ON A CLEAN TOWEL

In the sauna, sit on a (clean!) towel and wear sandals to lower your exposure to others' dripped sweat. Opt for a dry (low-humidity) sauna if you have a choice. The infected ones in the Alaska study were traditional steam baths. Saunas heated by wood or electricity provide a less-favourable environment for moisture-loving bacteria.

Chris Pribish, owner of Momentum Performance and Wellness in South Portland, Maine, encourages his patrons to use the hand sanitiser near the entrance on their way in and out. You could also follow Pribish's lead and avoid handheld food during and soon after gym visits.

As Goldstein's shower-wall story indicates, the need for vigilance doesn't stop just because your workout is over.

"There is virtually no circulation," she says of her gym's locker room, "so it always feels damp and sticky, and there are perpetually pools of water everywhere on the floor, with globs of hair and other unidentifiable detritus floating in them. I developed a very complex way of putting on pants so as not to ever let them touch the ground."

Brian Fullem, a sport podiatrist in Clearwater, Florida, says bacterial infection via feet is unlikely unless you have an opening in the skin, such as a blister. In addition, a 2015 study on bacterial variability in gyms found that "shoe" surfaces (floors, mats) are much less likely than "hand" surfaces (machine rails, free weights) to host rapidly evolving bacteria, which are more likely to cause infections.

Fungal infections, however, are another matter. "Fungus needs three things to grow - darkness, warmth, and moisture," he says, making both your workout shoes and a typical gym locker room perfect environments. Appropriately enough, tinea pedis, or athlete's foot, is the most common fungal infection picked up in gyms, according to Fullem.

"It's a good idea to wear some sort of foot gear at a public pool or locker room," Fullem says. As an extra precaution, apply an over-the-counter antifungal spray to your shoes and feet after gym workouts.

YOUR GYM SHOULD HAVE STANDARDS

All of these recommendations work best in well-maintained gyms. Dalman says to expect the same cleaning standards as you would of a hospital or restaurant. "You want to ensure that the facility is minimising the bacterial load to reduce the possibility of transmitting a potential antibiotic-resistant bacterium," he says.

Gyms aren't subject to health department inspections, so the onus is on patrons to learn about cleaning schedules and practices. Pribish's facility is cleaned daily with a surface disinfectant and decontaminant, is vacuumed and mopped daily, and gets spot cleanings throughout the day. There should be spray bottles and towel dispensers throughout the gym; Pribish has five bottle-and-towel dispensers in his 4,000 sq ft gym.

The industry standard for wipes and sprays is a solution that contains quaternary ammonium, an anti-bacterial compound. If there's not a publicly maintained cleaning schedule, ask the facility manager. And never be shy about approaching gym employees if the facility doesn't seem clean.

DO YOUR PART TOO

Of course, gymgoers need to do their part. Pribish has occasionally posted signs reminding patrons to wipe down equipment. If you see someone not doing unto others in this regard, talk to a gym employee rather than take up the matter yourself.

Again, use the facts about germs in gyms judiciously. "Is this helpful knowledge? Absolutely," Dalman says. "Should you stop working out? Absolutely not."