SINGAPORE - A bout of cool weather has hit Singapore, with temperatures plunging to 21.7 deg C in a few locations early Friday morning (Jan 12).

In fact, Singapore weather forecast is currently the top trending Google search topic, with over 5,000 searches.

Some people have taken out their winter wear, usually reserved for holidays in cooler places, while others are staying warm indoors.

With more cold and rainy days forecast for the week ahead, some social media users have wasted no time in coming up with quirky posts and memes in response to Singapore's cold spell.

Here are the ones that caught our attention:

On Friday, a Facebook user had posted a photo of the Merlion blanketed in snow with the caption: "Well, it's cold in Singapore finally!!" The post has since been removed.

The photo is, in fact, of a replica of the Merlion statue seen in the city of Hakodate in Hokkaido, Japan, that started making its rounds on the Internet late last year (2017). It was taken by Singaporean photographer Quek Choon Yang, while he was on a business trip to Hokkaido's third largest city in December.

Discussions abound on online forum Reddit, where a thread on Singapore winter was started on Thursday.

"Winter is coming!" said one user, who jumped at the chance to quote the hit TV series Game Of Thrones.

Others found humour and fun in the situation.

Said another user: "ADMIRALTY LOWEST yesssss my $11 ezbuy jacket can be put to good use hehehehe."

Reddit user amibitiousmoon posted a screenshot of the temperature in Sengkang dipping to 21.9 deg C late on Thursday night, with the caption: "Pray for us".

But several netizens responded to the post in celebration instead.

"This weather is absolutely divine," said one user.

Facebook user Hisham Karim wondered if Singapore could become a host city for the Winter Olympic Games, which will be in held in wintry South Korea next month.

Local actress Vernetta Lopez posted selfies on Instagram on Friday, where she is seen wearing a white beanie and a winter jacket.

She wrote: "I'm actually so cold I broke out the winter wear hahahaha #coldsingapore."

7. Freezing the moment in a screenshot

From Punggol to Toa Payoh, netizens posted screenshots of the low temperatures at their locations.

8. Time to bring out the winter wear

For some Twitter users, it is cold enough to bring out their winter holiday clothing and post about it too.

Oh my life, it's 22 degrees C and SOOOOOO cold in Singapore that PEOPLE ARE FREAKING OUT. Might need to crack open the 'winter/London clothing suitcase' Brrrrrrrr #winterinSG pic.twitter.com/g79wROUQjb

It's 23 degrees here in Singapore and everyone is either OMG IT'S SO COLD or TIME TO BRING OUT MY KNITS!

Local blogger Lee Kin Mun, better known as mrbrown, identified the "10 signs of a Singapore winter" in a post on Friday and also posted a photo of himself in a windproof, water-resistant jacket at a Housing Board void deck.

"I just returned from Japan where it is snowing, and when I got off the plane in Singapore, I did not need to take off my jacket," he wrote. "What happened to my Singapore?"

On his list includes having the air conditioner in a bus at a warmer temperature than the outside and placing a miniature heater on the table. 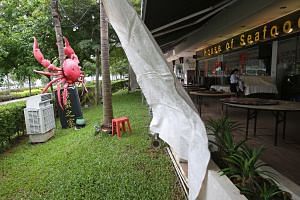