SINGAPORE - A monsoon surge in the South China Sea that is forecast to persist over the next few days saw temperatures dip across parts of Singapore on Wednesday (Jan 10) to 22.8 deg C.

This is below an earlier estimated minimum temperature of 23 deg C.

And the weather is predicted to get even cooler in the next few days, falling to as low as 22 deg C, according to a Facebook post by the National Environment Agency (NEA) on Wednesday.

On Wednesday, temperatures of 22.8 deg C were recorded between 6pm and 7pm in areas such as Changi, Newton and Ang Mo Kio by the Meteorological Service Singapore.

It estimates overcast and windy conditions with moderate to heavy rain over Singapore for the next few days.

The daily temperature during this period is expected to range between 22 deg C and 28 deg C. 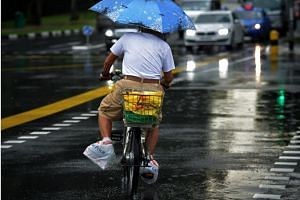 Wet, cool start to 2018 with north-east monsoon expected to continue for next 2 weeks

National water agency PUB said the wet weather conditions, due to the prevailing north-east monsoon, was aggravated by the development of a Sumatra squall over the Strait of Malacca which moved eastwards, affecting Singapore.

A chilly New Year in Singapore with temperatures as low as 23 deg C: NEA

According to NEA's website, the lowest temperature recorded in Singapore was 19.4 deg C on two days in 1934. Both days were in the month of January.

In response to queries from The Straits Times, the Met Service said temperatures below 23 deg C were recorded at several stations from around 5pm on Wednesday. The lowest temperature recorded was 22.7 deg C at Newton at around 7.30pm.

"The monsoon surge that has been affecting Singapore since Jan 10, 2018 is expected to persist for another one or two days before gradually weakening over the weekend. For the next few days, the lowest temperature is expected to be 22 deg C to 23 deg C, but could dip to just below 22 deg C."