SINGAPORE - The thermostat has been turned up both indoors and outdoors at a seafood restaurant in Punggol. Pre-school children have had to spend more time indoors, and some commuters are complaining about the traffic.

Everyone in Singapore has had to deal with the rain as well as the cool weather on the island.

The four machines typically used for outdoor cooling at the House Of Seafood restaurant in Punggol, for example, have now been set to reverse and are blowing warm air instead for the comfort of patrons in the alfresco area, owner Francis Ng, 44, told The Straits Times.

Plastic sheets have been put up to protect indoor customers from the wind and rain. Only three of the restaurant's eight air-conditioners are switched on, set to a balmy 22 deg C instead of the usual 18.

The restaurant is located at The Punggol Settlement and faces the sea, making it even cooler because of the breeze, according to Mr Ng.

"We have been here for about 3½ years, and this is the worst rainy season yet. The winds are stronger, toppling our chairs and blowing leaves indoors," said Mr Ng, who estimates that business has dropped by about 30 per cent since the start of the wet season in November.

At Casa Verde in Botanic Gardens, a spokesman for the Les Amis Group, which manages the restaurant, said sales have dropped by about 9 per cent this monsoon season. But it has started a delivery service to make up the numbers.

"Given that Casa Verde is located in the Botanic Gardens, our business is highly dependent on the weather... Nobody would want to visit the gardens on a rainy day. Secondly, we would also have to close certain outdoor sections of the restaurant due to heavy rain and the strong winds," said the spokesman.

Bistro Du Vin, which has two outlets in Shaw Centre and Zion Road that comprise mainly indoor seating, also reported a decline in the number of customers. Few would want to venture out for meals in the rain, said its director Philippe Pau.

Following a number of days of intense rain, temperatures across parts of Singapore dipped to a low of 22.8 deg C on Wednesday (Jan 10), and the forecast from the National Environment Agency is for cooler days ahead. 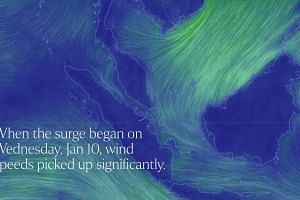 The low temperatures have been attributed to a monsoon surge in the South China Sea, a weather phenomenon that brings a rush of cool air and rain to Singapore.

Some people, such as housewife Yasmin Razak, 49, are enjoying the cool weather.

"The cold weather is nice for me to just relax and take a nap. When it's too hot, it feels stuffy, so this weather is very comfortable, especially if I am not out stuck in the rain. It's calming," she said.

But for others, such as accountant M. Kader, 28, the rain has made it tough to plan activities.

Pre-school teacher Jily Koh, 31, said she has to come up with alternative programmes for the 14 pupils in her class if planned outdoor excursions are cancelled because of the rain.

"The kids will be disappointed too, because they love playing outside in the sun," she said.

But the wet weather has not drastically affected attendance at the Little Swim School. Its coaches conduct swimming classes at various locations - including public pools, pools in condominiums, and its own all-weather indoor pool in WestWay mall in West Coast - for about 900 students aged between six months and 15 years each week.

"There has not been a significant drop in the number of students attending lessons. But it is up to the parents and whether they are comfortable sending their children for swimming lessons. If they are not, we may make alternative arrangements for affected lessons to be conducted at another time or at the indoor heated facility," said Mr Ryan Quek, general manager of Little Swim School. Coaches monitor weather conditions and assess lightning risks before each class.

Mr Kader, for example, complained about fare surges on ride-hailing apps Uber and Grab. Music facilitator S. Ibrahim, 65, told The Straits Times that his travelling time has tripled due to traffic slowdowns.

A spokesman for bus operator Go-Ahead Singapore said aircon temperatures are pre-programmed and will automatically maintain a temperature of between 21 and 25 deg C.

People have been feeling under the weather too.

Dr Michael Wong, family physician at Raffles Medical, said he has observed an increase in the number of patients with upper respiratory tract infections, such as those with common cold symptoms like cough and nasal congestion, and those with influenza-like symptoms of high fever and body aches.

Dr Leong Hoe Nam, an infectious diseases physician from the Mount Elizabeth Novena Hospital, said up to 80 per cent of his patients are now complaining of fever, headache and muscle aches, more than the usual number.

Similarly, general practitioner Yik Keng Yeong, from Tan and Yik Clinic and Surgery in Bishan, said there was a 10 per cent to 15 per cent increase in the number of patients with the common cold and flu during the cooler months of November and December.

"I would advise people to carry an umbrella with them, or to keep a fresh set of clothing in the office that they can change into if they get drenched. Taking vitamin C, eating wisely and resting adequately definitely help," said Dr Yik.