Before having group sex with other men, tutor Sim Eng Chee would often hire Ler Teck Siang - the doctor at the centre of the HIV registry data leak - to inject drugs into him and occasionally his "sex buddies", a district court heard yesterday.

Sim, a former drug abuser, testified that he had hired Ler to provide "outcall" services for him and his sexual partners for more than six months before both of them were arrested on March 2 last year.

Ler is on trial for allegedly abetting Sim in consuming methamphetamine on Feb 26 last year, and for possessing drug-related utensils on March 2.

Speaking on the third day of Ler's trial, Sim said he would even engage Ler twice a day for "slamming", street slang for the administering of illegal drugs by injection.

He added that he had first heard of Ler, whom he knew as Todd, through his "sex buddies" some time in the second half of 2017.

Sim was referred to Ler on Grindr, an app for gay people to meet one another, and later contacted Ler to ask if he provided "slamming" services.

He told the court that he preferred to have someone else do it for him as it was "less stressful". 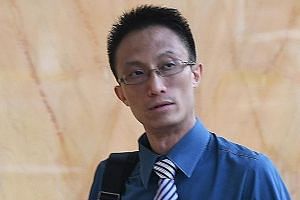 Who are the duo at the centre of HIV Registry leak?

Sim began engaging Ler - who went by the moniker Altitude - to inject methamphetamine, which he described as a sexual stimulant.

Sim said he rarely felt discomfort as Ler was professional in administering the drugs. "Even after he missed (a vein), he could give me a solid explanation of why he wasn't able to perform up to expectations."

A session typically cost $40 and Sim would also reimburse Ler for his transport costs, he said.

Occasionally, Ler asked him for a substance called "G water", which Sim said would "lift the high" of other drugs such as Ecstasy.

He gave Ler bottles of "G water" in lieu of payment for his services.

On Feb 26 last year, Sim engaged Ler again for a "slamming" session at Swissotel The Stamford, where he had booked a room for a romp with two men. Ler left after administering the drug, he said.

On March 2, Sim had another session, this time at the Conrad Centennial Singapore. He went to buy drugs in Geylang, and lined up sexual partners by reaching out to people on Grindr and his own contact list.

Again, he contacted Ler for "slamming" services, but both were arrested in the hotel lobby instead.

Sim, who was jailed on Sept 24 last year for his drug offences, is now serving the rest of his sentence in a halfway house.

Ler is serving a two-year jail sentence for cheating-related offences he committed while helping his American partner Mikhy Farrera-Brochez, who is HIV-positive, to deceive the authorities into letting him work here.

Ler also faces a charge under the Official Secrets Act relating to the HIV data registry leak, and another for failing to give a urine sample to Central Narcotics Bureau officers.

Both charges have been stood down for now.