SINGAPORE - In Singapore's upcoming Budget 2019, there could be an enhancement to the SkillsFuture initiative, given Singapore's need to train and reskill workers to stay relevant in the future, according to a report by UOB.

This could come in the form of identifying and introducing courses that leverage Singapore's digital transformation, especially in areas of robotics, digitalisation and programming, suggested UOB economist and author of the report Barnabas Gan.

Rolled out in 2016, the SkillsFuture programme allocates $500 to every Singaporean aged 25 and above. The amount is topped up at regular intervals and not expire.

"We perceive that such cutting-edge courses may likely not come cheap, so a dollars-and-cents enhancement to the overall SkillsFuture credit account will likely be welcomed too," said Mr Gan.

He cited a joint study by Cisco and Oxford Economics in September 2018, which found that Singapore will face the biggest mismatch between skills and jobs across six South-east Asian countries. About 20.6 per cent of Singapore's full-time workforce will see their jobs displaced by 2028 given the impact of artificial intelligence, compared to Vietnam (13.8 per cent displacement), Thailand (11.9 per cent), the Philippines (10.1 per cent), Indonesia (8.1 per cent) and Malaysia (7.4 per cent).

In the report, Mr Gan also said that there could be policies in Budget 2019 to help local firms in areas of innovation, digitalisation and internationalisation.

They could come in the form of research and development (R&D) incentives on qualifying activities, especially given the expected expiry of the Productivity and Innovation Credit (PIC) scheme after the year of assessment 2018, he said. 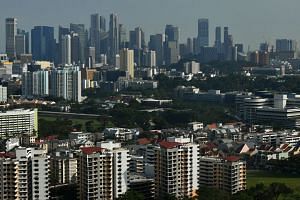 Budget 2019 could focus on SMEs: Analysts

According to him, there could also be the introduction of a new digital tax incentive or credit that could be offered to encourage companies to invest in new digital products and services, as well as a potential fintech incentive to promote the adoption of digital and mobile payments, authentication and biometrics.

Healthcare is also another key expenditure item that Mr Gan believes will be highlighted in the Budget.

He also said that the continued need to mitigate the rising threat of crime and terrorism, be it in a form of cybersecurity or physical presence within our shores, will likely take precedence in the upcoming Budget.

Finally, Mr Gan also expects further guidance on the Merdeka Generation Package that was announced by Prime Minister Lee Hsien Loong at the 2018 National Day Rally. The Merdeka Generation refers to the baby boomers born in the 1950s, a generation that had experienced the "indelible, formative" events during Singapore's establishment of its internal self-government from the British back in 1959.

To stay fiscally prudent, Mr Gan suggested three potential revenues drivers that could present themselves in the upcoming Budget.

The first is a sugar tax, which he says could help in the "War against Diabetes" coined by the Ministry of Health back in 2016, but it is unlikely to be a significant revenue driver.

"Importantly, Singapore's move to implement a sugar tax, should it come to pass, will likely be one to change behaviour, rather than to boost revenues," he said.

The second is likely to be taxes on digital purchases of goods and services. In the FY2018 Budget, Finance Minister Heng Swee Keat revealed goods and services tax (GST) on imported services effective Jan 1, 2020, which will affect services such as consultancy and marketing purchased from overseas.

Concrete tax measures to be announced could include lowering the $400 CIF (cost, insurance, freight) threshold value for imported goods, as well as implementing tax collection models, which could include the widely discussed Vendor Collection Model or the Reverse Charge Model, said Mr Gan.

He also said that a revisit to another increase in alcohol tax may be possible. The alcohol tax was last increased in the FY2014 Budget by then finance minister Tharman Shanmugaratnam.

"This may well be increased further as a move to moderate alcohol consumption, given that the initial tax hike back in 2014 has been rather ineffective: The overall effect on alcohol consumption was temporal, in that alcohol tax receipts at the onset of the tax grew by a mere 0.1 per cent before expanding by 30 per cent into June 2014," he noted.

Overall, he expects a potentially expansionary budget into FY2019, on the back of a moderating domestic economy coupled with Singapore's rising needs.

Despite the slower economic growth seen in 2018, he said that H1 2018 revenue collection was stronger than budgeted, suggesting that the initial $600 million budget deficit is likely to print close to UOB's estimate of a surplus of $1.4 billion. Given the strong surplus in the first half, Singapore will see a comfortable fiscal space in the second half of FY2018, he added.

He expects the upcoming Budget to see a small and manageable deficit of $1.2 billion.