SINGAPORE - In the upcoming Singapore Budget 2019, more help could be given to small and medium-sized enterprises (SMEs) to access policy assistance schemes as well as to support firms venturing into the Asean region, according to the second report from a three-part series from DBS released on Tuesday (Jan 29).

Irvin Seah, DBS senior economist and author of the report, noted that some policy measures continue to be "skewed in favour of bigger companies".

For example, schemes such as the SME Working Capital Loan are administered via participating financial institutions (PFIs), but the preference for these PFIs are typically skewed towards bigger companies with better financial standing, argued Mr Seah.

"Despite some risk coverage by the government, the outcome is that smaller companies who need more financing help may not get the necessary support regardless of their product innovation or business ideas," he said.

Mr Seah said the government "could consider taking a bigger share of the risk for smaller companies that apply for financial support". This would make such assistance schemes more within their reach.

While this has already been done previously for the Automation Support Package, further enhancement in the policy direction in favour of smaller companies could also be applied to many of the existing support schemes, he said.

SMEs below a certain level of sales turnover should also be given added attention in their grant applications, such as through simplifying the documentation requirements in the grant application process, suggested Mr Seah. 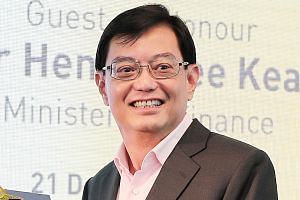 Budget 2019 could focus on SMEs: Analysts

He also said that there is a need to sharpen policy effectiveness by expediting grant approval process, as well as supporting the trade associations (TACs).

According to him, a fast track scheme for grant approval could be implemented for selected high growth industries to spur intensification of investment into those clusters, with the aerospace industry cited as an example.

TACs should also be given more support to enable them to set up more overseas offices to better facilitate the local companies that are venturing abroad, he said.

"With a better understanding of the various types of businesses and markets, the TACs would be able to leverage on their local contacts and resources to help their members explore overseas markets," he said. "This could potentially be more effective than ESG (Enterprise Singapore) overseas offices that tend to be overloaded with both commercial and bilateral relation issues."

With trade and investment flows likely to be diverted to the region in the next few years, he pointed out that Singapore will be in a unique position given its regional hub status, a comprehensive free trade agreement network and higher level of business sophistication.

"Policy measures by the government to provide greater support for companies in the development of their capabilities and in their internationalisation efforts would likely yield positive outcomes in the mid to longer-term," he noted.

"Indeed, we expect the government to 'double-down" on the efforts in this regard in the upcoming Budget."

While the overall economic outlook has become more bleak, Mr Seah said that the recession risk is still remote in 2019.

Regardless, the government is likely to stay the course on restructuring to prepare the economy for the future, rather than using fiscal stimulus as a counter-cyclical policy tool, he concluded.