BANGKOK (REUTERS) - Thai prosecutors said on Wednesday (Feb 27) that they will decide after a March 24 election whether to pursue criminal charges against the leader of a new political party who criticised the military junta in a speech on Facebook last year.

The deferment of their decision came on the same day that Thailand's Constitutional Court is to consider disqualifying another opposition party from the election, the first since a 2014 military coup.

The legal moves have raised fresh questions over the fairness of Thailand's electoral process.

Thanathorn Juangroongruangkit, a 40-year-old auto parts billionaire and political novice, and two colleagues could be jailed for up to five years under the Computer Crime Act for "uploading false information" in a speech posted on Facebook in June.

His Future Forward Party has denied the charges against the three and said points made in the speech were public information.

Mr Thanathorn, who has promised to end what he describes as a dictatorship and to weaken Thailand's military, said earlier on Wednesday that the prosecution was politically motivated.

"We believe in our innocence. We believe in the rights of the people to criticise those in power, the fundamental rights of democracy," he told reporters before meeting prosecutors. 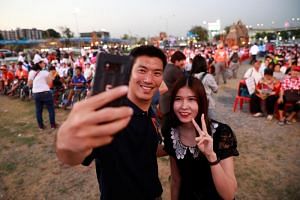 Key players in the elections

"As Future Forward gains more attention every day, there are attempts to undermine us," he said.

Mr Wichian Thanompichai, director-general of the Office of Criminal Litigation, told reporters that prosecutors needed time to consider the case because of the level of public interest.

"We won't be able to decide before the election, most likely March 26," he said.

Mr Thanathorn has gained popularity, especially among young people, with his social media savvy and calls to end military meddling in politics.

He was greeted by crowds of supporters, some of whom handed him flowers, as he arrived at the attorney-general's office.

"We stand by you. We love you. Please take care of yourself," one supporter told Mr Thanathorn.

The Constitutional Court is set to decide later on Wednesday whether another anti-junta party, the Thai Raksa Chart Party, can contest the election. The party faces accusations of violating an electoral law against using the monarchy in election campaigning.