He is accused of breaching election rules; move comes day before Parliament opens

In a statement issued yesterday afternoon, the court said it will hear a complaint filed by the Election Commission that he breached election rules by owning shares in a media company after he applied to run in the March 24 polls.

"If (the accused) performs his duty (as a Member of Parliament), it may lead to legal issues and arguments that hinder the House of Representatives," it said.

The suspension will last until a verdict is reached.

Mr Thanathorn, whose one-year-old party bagged 80 seats in the election to become the third-largest outfit in the 500-seat Lower House, denies the charge. If found guilty, he could be disqualified permanently.

The charismatic tycoon-turned-politician, a strident critic of the powerful military, found popularity among first-time voters in a kingdom riven by deep political conflict.

He was charged with computer crime for criticising the junta on Facebook last year. 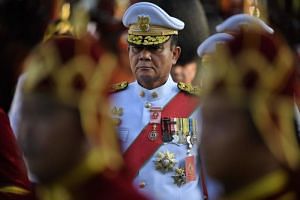 After the election, he was charged with sedition for allegedly aiding anti-junta activists in 2015.

At a press conference last night, Mr Thanathorn accused the junta of trying to demolish him because it was declining in influence.

"I, the Future Forward Party executives and 79 Members of Parliament are still full of hope and we will move forward," he said.

"I may be barred from performing my duty as an MP but I am still an MP," he added.

The court decision means he would not be able to attend parliamentary meetings that start after King Maha Vajiralongkorn and Queen Suthida officiate at the opening of the new Parliament today.

After the Senate and House of Representatives elect their respective Speakers by tomorrow, both Houses will come together to choose a prime minister.

With an election re-run to be held for one remaining seat on Sunday, the former ruling Pheu Thai party has the most seats - 136. The pro-junta Palang Pracharath Party is next with 115 seats.

Pheu Thai and six other allied anti-junta parties, including Future Forward, combine for just 245 seats, not enough to secure a parliamentary majority.

The Democrat Party, which bagged 52 seats, and Bhumjaithai Party, with 51 seats, have yet to declare their position amid reports of heavy horse-trading behind the scenes. Their decision will ultimately decide which bloc prevails in Parliament.

A new Constitution enacted after the coup is weighted in favour of this outcome as it gives the 250-seat appointed Senate a say in deciding who will be prime minister.

Last week, the government unveiled its list of appointees, which is packed with police and military officers, as well as former legislators who had served under the junta administration. The senators are widely expected to support Mr Prayut, so Palang Pracharath theoretically needs only to muster 126 seats in its coalition in order to ensure he is prime minister again.

Analysts, however, say this margin would create a very unstable government for Asean's second-largest economy.

Correction note: The article has been edited to reflect the correct number of votes that Future Forward Party won.