BANGKOK (REUTERS) - Young people line up to take selfies with him. His hashtags are trending. And when billionaire Thanathorn Juangroongruangkit promises an end to Thailand's military "dictatorship", supporters of his Future Forward Party roar their approval.

The 40-year-old heir to an auto parts fortune is a political newcomer and social media star who has energised young voters ahead of March 24 elections, the first since a coup in 2014.

"I urge our 'Futuristas' to campaign against the future in which the junta leader comes back as a prime minister," Mr Thanathorn said at a rally last Saturday (Feb 23).

His message has drawn the attention of police, who want to prosecute him under the Computer Crime Act for criticising the junta in a Facebook video in June. If found guilty of uploading false information, he could face up to five years in prison.

He denies wrongdoing, and on Wednesday will meet prosecutors who will decide whether to take the case to court.

Mr Thanathorn also faces a lobbyist's petition asking the Election Commission to disqualify him as a candidate.

These moves, he said, are a sign that his left-wing party is worrying those who want to see the military retain broad power. 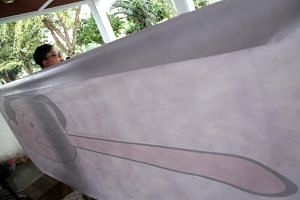 Key players in the elections

"It's fear. Nobody thought we'd come this far. This is dictatorship's last struggle for life," he told Reuters.

Posts shared on social media have cast him as anti-royalist, a serious accusation in a country where criticism of the king is against the law. Mr Thanathorn calls it a smear campaign.

"It's clear we'll be playing a significant role after the election. The only way to undermine us is to destroy our credibility by means of law, fake news and hate speech," he said.

He promises a new kind of politics to heal the divisions of the past 15 years and reduce the role of the military. The challenge for Mr Thanathorn - nicknamed "Daddy" on social media - will be to turn his online popularity into votes.

The election is broadly seen as a race between the military-backed royalist prime minister, Mr Prayut Chan-o-cha, and supporters of exiled former premier Thaksin Shinawatra, who was overthrown in a 2006 coup.

Parties loyal to Thaksin have won every election since 2001, but after he was ousted, successive governments have been removed by courts or coups, most recently in the 2014 military takeover.

Thai opinion polls can be unreliable, but a Feb 20-23 survey showed the Future Forward topping a list of favoured parties with 37.8 per cent support, compared to 7.5 per cent a month ago.

The February poll conducted by Bansomdej University surveyed 1,152 people in Bangkok, with a 3 per cent margin of error.

Other polls had Future Forward's support at below 10 per cent and lagging behind the pro-Thaksin Pheu Thai party or the Palang Pracharat party, with junta leader Prayut as its candidate.

A former student activist, Mr Thanathorn took over his late father's Thai Summit Group at age 23. Before entering politics, he was known for running ultra-marathons in the Arctic and Sahara, and trekking in Morocco's Atlas Mountains.

He has been embraced by social-media savvy young people, many of them politicised in a way rarely seen since state forces crushed student pro-democracy movements in the 1970s.

About 14 per cent of the electorate, or seven million people, are eligible to vote for the first time next month.

They have lived through Thailand's "colour wars", with anti-Thaksin Yellow Shirt protesters and the former premier's loyalist Red Shirts alternatively paralysing Bangkok for weeks at a time.

Last week, "#SaveThanathorn" topped Thai-language Twitter after police said they would prosecute him for cyber crimes.

Another hashtag, "#FahLovesDaddy", had fans jokingly comparing the candidate to a soap opera character "Daddy", a charismatic businessman pursued by a female protagonist, Fah.

He tweeted back "#DaddyAsksFah" to urge supporters to vote.

"GAME OVER FOR DEMOCRACY"

Mr Thanathorn said he was confident his party could send at least 70 members to the 500-member House of Representatives.

That could be enough to influence a coalition against military rule, analysts said, even if his candidacy is in doubt.

On Monday, a lobbyist petitioned election officials to disqualify Mr Thanathorn, alleging he had misled voters in a party biography that described him as chairman of the Federation of Thai Industries, when he in fact had led a provincial chapter.

"With one month left, who knows what magic tricks the junta still has up their sleeves?" Mr Thanathorn said. "If the junta manages to destroy both Thai Raksa Chart and Future Forward, it's game over for democracy".