BANGKOK (REUTERS) - Thai police said on Wednesday (Feb 20) they were seeking the prosecution of the leader of a new political party over a speech he made that was posted on Facebook criticising the ruling junta, just over a month before a general election.

The legal action against Mr Thanathorn Juangroongruangkit, 40, and two senior colleagues in the Future Forward Party, which has attracted the support of young voters, will add to concern that the military is determined to retain a hold over politics, even after the return of civilian rule in the March 24 vote.

"We will send both the case for prosecution and the suspects to the attorney-general," Police Lieutenant Colonel Krit Seneewong Na Ayutthaya, an investigator on the case from the police cyber crime division, told Reuters.

Mr Thanathorn, an auto parts billionaire and newcomer to the political scene, and his two colleagues could be jailed for five years under the Computer Crime Act for "uploading false information" in a speech posted on Facebook in June last year.

Mr Krit said the case would be referred next week to state prosecutors, who will decide whether to take it to court.

The Future Forward Party has denied the charge, saying the points made in the speech were public information.

"It's obvious that as the election approaches, the case is being rushed ahead ... We're ready to face whatever challenge comes our way," Mr Thanathorn told reporters at a rally in Bangkok on Wednesday.

Hundreds of young people, many of them students, turned out for the rally. Most took pictures and videos of Mr Thanathorn and some queued up to take selfies with him. 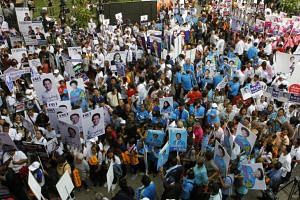 Next month's general election is the first since a 2014 military coup.

While the vote is being highly anticipated by political parties and voters, some grumble that a new constitution, drafted under military supervision, will ensure that the generals will retain a significant role in politics.

Mr Thanathorn launched his party last year, promoting it as an alternative to Thailand's polarised politics, which has for years pitted loyalists of ousted ex-premier Thaksin Shinawatra against establishment parties supporting the military-royalist elite.

Mr Thanathorn has been critical of military rule, recently pledging to prosecute coup-makers and amend the new constitution.