WASHINGTON - The United States will go to war with North Korea if it fires missiles at Guam, US Defence Secretary Jim Mattis said on Monday, issuing another strong warning to Pyongyang.

"You don't shoot at people in this world unless you want to bear the consequences," Mattis said during the unannounced visit to the Pentagon's press room. He cautioned against portraying his words as a virtual declaration of war.

Mattis said that the US military would be able to determine "within moments" after launch whether or not a North Korean missile was headed for US territory, including Guam.

He later added that the US would "take it out" if the missile was determined to be headed for any US territory.

But he also made clear that while the military was poised to protect Guam from the North Korean military threat, a declaration of war was a decision that remains with President Donald Trump and Congress.

"War is up to the President, perhaps up to the Congress, the bottom line is we will defend the country from an attack, for us that's war, that's a wartime situation," he said in comments carried by the CNN.

"We will defend the country from any attack, at any time, from any quarter. Yes, that means for a lot of young troops they're going to be in a wartime situation, welcome to reality. But it's not declaring war, it's not that I'm over here Dr. Strangelove doing things like that," he added.

Mattis was vague about what would happen if missiles were launched toward Guam but splashed into the sea, reported Bloomberg.

He said US.surveillance would know if the missiles would hit land within moments of them being fired. “I need a certain amount of ambiguity because I’m not going to tell them what I’m going to do in each case,” Mattis said.

Guam, a US territory in the Pacific, has emerged as a major security issue following North Korea's threats to fire missiles near Guam, home to US air and naval base.

Initially Mattis declined to comment on how the US would react to a North Korean missile attack, saying the president had made it clear.

Last week, the US defence secretary warned the North to "cease any consideration of actions that would lead to the end of its regime and the destruction of its people", reported Yonhap news agency.  But he has also emphasized the need to diplomatically resolve the standoff with the recalcitrant state. 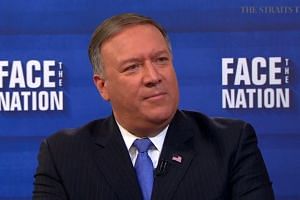 In an op-ed published in the Wall Street Journal on Sunday, Mattis and Secretary of State Rex Tillerson said the Trump administration will aim to denuclearize the Korean Peninsula through diplomatic and economic pressure.

"While diplomacy is our preferred means of changing North Korea's course of action, it is backed by military options," they said.

“The U.S. has no interest in regime change or accelerated reunification of Korea. We do not seek an excuse to garrison U.S. troops north of the Demilitarized Zone,” the officials said, addressing some of Pyongyang’s fears that Washington ultimately intends to replace the reclusive country’s leadership.

The typically blunt words from Mattis came hours after the top US general reassured South Korea that a diplomatic solution to the tensions with North Korea over its nuclear arsenal was Trump’s priority.

Other administration officials also have sought at least a temporary halt in the war of words between Trump and Kim, which sparked fears that a miscalculation could lead to conflict.

"Our job is to make sure our leadership has an option available to them," General Joseph Dunford  told a group of reporters in Seoul. "I believe there are two things we are clear about: One, our responsibility to defend against attack, two, our requirement to make sure we have a decisive response in the event of attack."

"We are capable of defending them (American and Korean people) right now, against limited attacks and certainly are prepared to be strong in case of deterrent fails," he added. He arrived in South Korea on Sunday for a two-day visit, the first leg of his tour to Asia which also includes stops in Japan and China.

North Korea's Korean Central News Agency (KCNA) said on Tuesday (Aug 15) North Korean leader Kim Jong Un has been briefed on a plan to fire missiles near Guam. Kim said he will watch the actions of the United States for a while longer before making a decision, the KCNA report added.

Tensions have been mounting since the North tested two intercontinental ballistic missile tests last month, which appeared to bring much of the US within range.

Responding to the tests, US President  Trump warned Pyongyang of "fire and fury like the world has never seen". The North in turn threatened to test-fire its missiles towards the US Pacific island of Guam.

The war of words has sparked global alarm, with world leaders including Chinese President Xi Jinping urging calm on both sides. South Korean President Moon Jae In also waded in on Monday, calling for calm in the standoff with North Korea, saying there should never be another war on the peninsula.

President Trump is due to discuss the crisis with Japanese Prime Minister Abe in a phone call later Monday Washington time.

The US and South Korea will start their Ulchi-Freedom Guardian joint military exercises on Aug 21 and analysts have warned that North Korean is likely to time its next missile or nuclear test next week to signal its unhappiness with the drills, which Pyongyang view as preparations for an invasion.

Seoul and Washington say the exercises are defensive in nature. 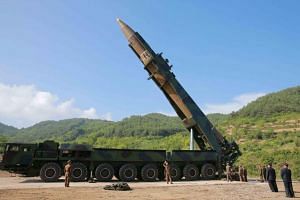