NEW YORK/BEIJING (AFP, REUTERS) - US President Donald Trump on Wednesday (Aug 16) praised North Korea’s leader for backing off on plans to fire missiles towards the US Pacific territory of Guam, while the head of the US military said during a visit to Beijing that it was increasingly urgent for China to step up pressure on North Korea.

“Kim Jong Un of North Korea made a very wise and well reasoned decision. The alternative would have been both catastrophic and unacceptable!” Trump wrote on Twitter.

Trump stunned the world last week by warning North Korea that it faced “fire and fury” if it continued to threaten the US or its allies with its ballistic missile programme. His impromptu comments while on vacation in New Jersey were interpreted as raising the prospect of a US nuclear attack against North Korea.

The unpredictable and isolated North Korean leader on Tuesday had been briefed by his missile forces on a “plan for an enveloping fire at Guam”, according to the North’s official KCNA news agency.  But afterwards, according to KCNA, he decided to postpone the operation to “watch a little more the foolish and stupid conduct of the Yankees” and not to go ahead unless the United States commits more “reckless actions”.

Secretary of State Rex Tillerson said after Kim postponed the threat that Washington remains ready for talks.  But he added that would be up to Kim when such negotiations would begin.

Meanwhile in Beijing, General Joe Dunford, chairman of the US Joint Chiefs of Staff, told China's General Fang Fenghui during a meeting on Tuesday that the United States was ready to use military options if diplomacy fails, Pentagon spokesman Captain Darryn James said in a statement.

During their talks, Gen Dunford and Gen Fang, who is chief of the Joint Staff Department, signed a Joint Staff Dialogue Mechanism to improve communication between their militaries.  But Gen Dunford “stressed that it will only be useful if it results in reducing the risk of miscalculation, which not only has long-term benefits to manage bilateral differences”, said the Pentagon spokesman.

The mechanism, he added, “is especially critical now due to growing North Korean provocations”.

“GenDunford delivered a clear message that North Korean ballistic missile and nuclear weapons programmes threaten the entire global community, including China, Russia, the US and our allies,” Capt James said.  “In the interest of regional stability, he said the US views with growing urgency the need for China to increase pressure on the North Korean regime.” 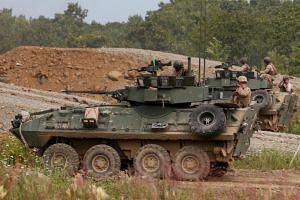 US, Japan conduct air drills as North Korea watches next move by 'Yankees'

Trump's administration has exhorted China to strong-arm its diplomatic ally into dropping its rogue weapons programmes.

China, which is Pyongyang’s main economic partner, announced this week that it was banning imports of iron, iron ore, lead and seafood from North Korea in accordance with new United Nations sanctions.

“Should preferred diplomatic and economic peaceful options fail, Gen Dunford reiterated America’s resolve to use the full range of military capabilities to defend our allies in the Republic of (South) Korea and Japan, as well as the US homeland,” Capt James said.

Gen Dunford is visiting China this week after holding meetings with military officials in South Korea, where he reiterated Washington’s readiness to use military means to defend its allies. The US general continues his China trip on Thursday (Aug 17) before heading to Japan.