WASHINGTON - A tough warning of "fire and fury" against North Korea from President Donald Trump has triggered wide alarm in American political circles, with lawmakers and analysts warning that such rhetorical slanging matches with Pyongyang risk bringing the two sides closer to a catastrophic miscalculation.

Hours after Mr Trump’s warning,  the North Korean military - in response to a recent  flight over the Korean Peninsula by  American bombers from Guam - said it was “carefully considering” a plan to target the island with missile strikes.

Mr Trump, speaking on Tuesday (Aug 9 Wednesday Singapore time) at his golf course in Bedminster, New Jersey, where he is on a working vacation, warned "North Korea best not make any more threats to the United States."

"He (North Korean leader Kim Jong Un) has been very threatening beyond a normal state. They will be met with fire, fury and frankly power the likes of which this world has never seen before," he said in his toughest language yet on North Korea.

His warning came hours after the Washington Post reported a confidential US intelligence assessment concluded that North Korea has successfully produced a miniaturised nuclear warhead that could fit inside an intercontinental ballistic missile (ICBM).

Until Tuesday evening US time, there was no official comment on the report.

The statement was in response to the flight over the Korean Peninsula on Aug 7 of American bombers from Guam, accompanied by Japanese and South Korean fighter jets.

Guam, in the western Pacific, is a US territory and home to US air force and naval bases as well as some 6,000 American troops. 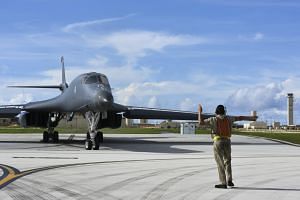 Guam dismisses North Korea's threat, says it is prepared for any eventuality

The Korean People's Army spokesman said in a statement that the plan would be put into practice at any moment once leader Kim makes a decision.

Separately in a video statement, Guam Govenor Eddia Baza Calvo said there had been "no change in the threat level from recent North Korea events."  He said Guam was prepared for any eventuality  with defences strategically placed to protect its people.

The sharp increase in tensions rattled global financial markets on Wednesday morning and prompted calls for restraint from US lawmakers and political watchers .

Republican Senator John McCain told an Arizona radio station: "I take exception to the President's comments because you've got to be sure you can do, what you say you're going to do."

"The great leaders I've seen don't threaten unless they're ready to act and I'm not sure President Trump is ready to act."

But he added: "It's not terrible in what he said. It's the classic Trump in that he overstates things."

Democratic Party Congressman Joaquin Castro, a member of the House Foreign Affairs Committee, said in a statement that "President Trump should not be matching reckless comments for reckless comments with Kim Jong Un."

"The United States needs to be a steady, reliable partner to our allies in the face of North Korea's destabilising provocations. President Trump must rise to this responsibility and stop issuing dangerous, inflammatory statements."

Democratic Party Senator Dianne Feinstein, chair of the Senate Intelligence Committee, said in a statement: "Isolating the North Koreans has not halted their pursuit of nuclear weapons. And President Trump is not helping the situation with his bombastic comments."

"The United States must quickly engage North Korea in a high-level dialogue without any preconditions. In my view, diplomacy is the only sound path forward."

Similarly Mr James Clapper, former director of the CIA, told CNN: "We need to have dialogue with them... accept the fact they are a nuclear power."

"I would also appeal to those in the media to tone down the rhetoric," he added.

"We should not be engaging in the same kind of bluster and provocative statements as North Korea about nuclear war."

North Korea tested two ICBMs in July. Experts concluded the second test showed Pyongyang could hit a significant portion of the American mainland, though doubts remained over North Korea's ability to arm it with a nuclear warhead.

Earlier this week, North Korea lashed out at a new round of UN Security Council sanctions, calling them an attempt to "strangle" the country.

Mr Jon Wolsthal, a former senior National Security Council director for arms control and non-proliferation now with the Carnegie Endowment for International Peace, tweeted: "We are closer to nuclear use now than at any time since the Cuban Missile Crisis. We need the President to stabilize, not disrupt."