The shooting of an 18-year-old student by police using live ammunition during chaotic mass protests on Tuesday has divided opinion in Hong Kong, with some saying it has been a long time coming, and others calling it a clear sign of excessive use of force by police.

As protesters rampaged through Hong Kong on Tuesday, China's National Day, chaos erupted in at least 10 districts in the city as anti-government demonstrators built barricades, started fires and engaged in violent clashes with police by tossing bricks and Molotov cocktails.

According to footage of the incident, protesters tossing bricks had been chasing riot police officers for hundreds of metres when a small group became separated.

A group of protesters then chased an officer, knocked him to the ground and kicked and beat him with pipes.

When a colleague with a drawn handgun tried to rescue him, a protester hit the officer's trigger hand with a pipe, and the policeman pulled the trigger.

The protester stumbled several steps and fell backwards over the officer on the ground.

Police chief Stephen Lo said that what the officer did was "lawful and reasonable".

But we are only an enforcement agency with limited power under the law... In the face of such a massive series of rioting incidents, we cannot work alone without appropriate measures and support from the top level.

MR LAM CHI WAI, chairman of Hong Kong's Junior Police Officers' Association, which issued a statement along with pro-Beijing lawmakers calling on the city's leader to evoke a colonial-era law and declare a public emergency.

The protester, identified in media reports as Tsang Chi Kin, was taken to hospital in critical condition, but his condition had since stabilised, police said yesterday.

Deputy Police Commissioner Chris Tang told a media briefing that even though the officer had been holding a non-lethal rifle, he resorted to using his pistol because he was making a decision "between life and death", and there was "no choice".

Asked why the officer had aimed for the protester's chest, the Deputy Commissioner said aiming at the largest surface and most effective point is in accordance with police guidelines.

But many in the pro-democracy camp insisted it was yet another incident of police using excessive force.

An Indonesian journalist will go blind in her right eye after she was hit in the face by a police rubber bullet last weekend.

There have been accusations that police use excessive force when arresting protesters, with allegations that many suffer bruises, fractures and broken bones.

Police said yesterday that they fired 1,400 rounds of tear gas, 900 rubber bullets, 190 beanbag rounds and 230 sponge-tipped rounds at protesters on Tuesday, the largest number in a single day since protests escalated in June.

On popular online forum LIHKG, where the public discusses protest strategies, users described the incident as a "debt of blood" which must be repaid. 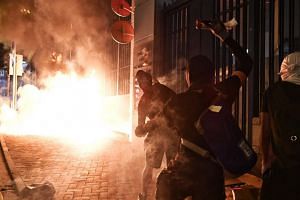 Hong Kong protests led high school student to activism, then to the point of a gun

Many blocked roads and held up the right hand, signifying the five demands of the movement.

The protests have evolved in the past three months, going from being against a contentious extradition Bill, now withdrawn, to calling for more democracy in the territory.

Meanwhile, along with pro-Beijing lawmakers, the city's biggest police group, the Junior Police Officers' Association, issued a statement calling on the city's leader to evoke a colonial-era law and declare a public emergency.

The colonial-era Emergency Regulations Ordinance allows for several draconian measures, including censorship, arrests, control of transport, and the entry and search of premises.

Association chairman Lam Chi Wai said that police have been performing their duties in "war zone-like riots", while the government has failed to take any effective measures to resolve the situation.

"But we are only an enforcement agency with limited power under the law.

"In the face of such a massive series of rioting incidents, we cannot work alone without appropriate measures and support from the top level," he said.