HONG KONG (REUTERS, AFP) - A Hong Kong police officer shot a protester with a live round on Tuesday (Oct 1) after his unit was attacked by demonstrators in Tsuen Wan district during sustained clashes in the city, a police spokesperson said.

The spokesperson said the shot hit the shoulder of an 18-year-old man.

The wounded man received initial first aid from officers before paramedics arrived, and was then taken to Princess Margaret Hospital. He was later transferred to Queen Elizabeth Hospital, and underwent surgery. His parents were at the hospital, and sources said the bullet was removed from the man.

At least 51 people had been admitted to hospitals across the city following Tuesday’s clashes, and two were in critical condition. More than 180 people were arrested, and 25 police officers were hurt in the clashes.

Two videos posted online showed the shooting and its aftermath, which took place in Tsuen Wan, a district where hardcore protesters had clashed with police throughout the afternoon.

Some half a dozen riot police can be seen clashing with around 12 masked protesters, some of whom were using umbrellas and metal poles to strike the officers.

One officer runs into frame with his sidearm drawn. He kicks a protester before firing at near point blank range into the shoulder of a protester with a metal pole in his hand.

A gunshot can be heard as the pistol rears upwards. 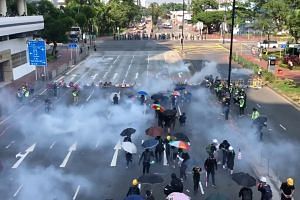 The protester stumbles backwards and then falls over a police officer who has been knocked to the ground as the rest of the demonstrators run away.

Footage filmed shortly afterwards by local broadcaster Stand News showed police officers treating the prone man who had an oxygen mask on his face and his T-shirt cut open, traces of blood on his chest.

Paramedics later arrived on scene and placed the man, who was conscious, on to a stretcher.

Protesters had vowed to seize the opportunity on China’s National Day to propel their calls for greater democracy onto the international stage, hijacking an occasion Beijing sees as an opportunity to showcase China’s economic and military progress.

Police Senior Superintendent Yolanda Yu, in a recorded video message on Facebook, said the police force is "saddened" that an 18-year-old man was injured by a live round.

"At about 4pm, a large group of rioters attacked police officers near Tai Ho Road, and they continued with their attack after officers warned them to stop. As an officer felt his life was under serious threat, he fired a round at the assailant to save his own life and his colleagues’ lives," she said.

"The police force really did not want to see anyone being injured, so we feel very sad about this. We warn rioters to stop breaking the law immediately, as we will strictly enforce the law," she added.

Hong Kong has been tense for weeks, with anti-government protests often turning violent.

Nearly four months of street clashes and demonstrations have plunged the former British colony into its biggest political crisis in decades and pose the most serious popular challenge to President Xi Jinping since he came to power.

Earlier, thousands of black-clad protesters, some wearing Guy Fawkes masks, marched from Causeway Bay towards government headquarters in Admiralty, defying a ban on a rally.

Rail operator MTR Corp shut down many of its metro stations to stop protesters moving around. Shutting stations have made them a common target for attack, and a fire was lit at Admiralty station on Tuesday.

“I’m not young, but if we don’t march now, we’ll never have the chance to speak again, it’s as simple as that,” said one marcher near Causeway Bay, a 42-year-old woman with her own logistics company who identified herself as Li.

Hundreds of officials and members of  Hong  Kong’s pro-establishment elite began the day with a flag-raising ceremony and National Day reception at the Convention and Exhibition Centre, held early and moved behind closed doors. Roads to the Centre were closed and tightly policed.

Hong Kong had benefited from China’s support under the “one country, two systems” policy, Acting Chief Executive Matthew Cheung told the assembly, referring to guarantees of political freedoms after the city’s handover from British to Chinese rule in 1997. But he said escalating violence was disrupting social order and hurting the economy.