HONG KONG - Police on Tuesday (Oct 1) fired volleys of tear gas against protesters in Hong Kong who had blocked nearby roads as tens of thousands of people, many in black and armed with brollies, thronged the streets in a show of defiance and their disapproval of the government.

This is despite authorities warning people not to join unapproved marches and not to break the law.

In Sha Tin, protesters at the Lucky Plaza residential complex have been repeatedly tossing bricks and glass bottles at riot police gathered below them, prompting the officers to respond with tear gas and foam bullets.

The same scenario was repeated in Wong Tai Sin.

In Tsuen Wan, masked protesters used umbrellas and sticks to beat riot officers after they made a series of arrests. The officers retreated into a nearby town hall after they came under a barrage of projectiles.

There were also reports of corrosive fluids thrown in Tuen Mun, hitting police officers and reporters.

The clashes came after the city was put on lockdown earlier on Tuesday, with beefed-up police presence overnight, suspension of some train services and multiple malls in clash-prone areas declaring shut, as residents of the territory now on high alert prepare for a possible showdown between the authorities and some hard-core protesters whom the police say put Hong Kong "on the verge of extreme danger".

Tall water-filled barricades surrounded key government buildings, while the police blocked off certain roads in Wan Chai area from midnight to limit access to Bauhinia Square where the flag-raising ceremony for China's national day celebrations was held at 8am, followed by a reception at the Convention and Exhibition Centre nearby.

"Violence and confrontation are never solutions to problems," said Mr Cheung. "To resolve the current acute social conflicts, we need more than ever the solidarity of all Hong Kong people to work towards the same goal, seek common ground and accommodate differences."

In his address at the reception, he said citizens here want to get out of this impasse and that the government has displayed the greatest sincerity and wants to have dialogue with the people.

Dozens of malls across the city, including Maritime Square in Tsing Yi, Telford Plaza in Kowloon Bay, Kornhill Plaza in Quarry Bay and Mira Place in Tsim Sha Tsui, announced on social media that they will be shut for the day.

The suspension of some metro services failed to deter people from marching.

A participant of the march from Causeway Bay to Central who wants to be known only as Mr Chan, 35, says he is not prepared, but he knows that the police will come out and clear the streets.

"They don't get to dictate whether we come out or not. It is not police state yet and I believe that it shouldn't be. So this is our right to be on the streets. I mean, the police can get me for jay walking, that's all. I'm not chanting anything, nothing aggressive."

Police issued a statement in the afternoon urging people to "leave the scene as soon as possible".

"At around 1pm today (Oct 1), protesters have been occupying Hennessy Road of Causeway Bay and are proceeding to Admiralty," said the statement. "They are participating in an unauthorised assembly, which constitutes an illegal act."

The police also said that a large group of violent protesters outside Tuen Mun Town Hall have set up barricades, damaged properties and attacked police personnel at scene.

Warning the protesters to stop their "illegal acts" and leave immediately, the police added that they will not hesitate to use "appropriate force" to disperse the protesters.

Overnight, local media reported that the police arrested five men aged 17 to 31 for allegedly making petrol bombs. Another 14 people were detained in Hung Hom and Tuen Mun, and police confiscated a bunch of black balloons.

Messages circulated on Telegram called on netizens to gather in Sha Tin at 11.30am to protest and in five other districts - Wan Chai, Sham Shui Po, Tuen Mun, Tsuen Wan and Wong Tai Sin - at 1pm. Madam Gigi Yung, 63, who lives near Sha Tin, was attending the march to protest the Chinese government.

"They say life is good in China but people can’t even trust the canned food in their own country," she said.

"Since I live nearby, I thought it’d be good for my son to experience the right to protest, even if for a short bit. Because he’s been watching TV at home and he sees all these images and has been asking me about what is going on. He’s young but it’s a good time to start."

She added that the previous weekend, the family had gone out to a mall in Kwai Chung when it was suddenly shut, which scared her children, so she is taking the opportunity to show them protests are not all bad.

On Monday night, the government urged the public not to join unapproved marches, saying "the dangerous acts of extremely violent protesters have become more severe recently to involve highly dangerous actions such as hurling petrol bombs, setting fires and posing an extreme threat to the personal safety of the public".

"According to online information, unauthorised public order events are very likely to take place in various districts in Hong Kong, which may cause severe disruptions. Members of the public are reminded to remain vigilant and mind their own safety," a government spokesman said in a statement.

He added that parents and teachers should also advise younger children and students to remain in safe places.

Hong Kong police face off with protesters on Oct 1

Pro-democracy figures on Monday vowed to hold a march on Tuesday that will start from East Point Road in Causeway Bay to Chater Garden in Central at 1pm.

The secretary-general of the Confederation of Trade Unions Lee Cheuk Yan said they will not apply for a "letter of no objection" for the event as Hong Kong people's freedom to protest is already enshrined in the Basic Law and does not require the authorities' green light, local media reported. 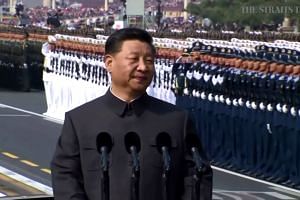 This planned protest comes after a proposed rally and march along the same route by the Civil Human Rights Front were rejected by the police and an appeal board.

On Monday morning, Chief Executive Carrie Lam led a delegation of more than 240 people from Hong Kong to Beijing for Tuesday's National Day celebrations to mark the 70th anniversary of the founding of the People's Republic of China. Among the attendees are Justice Secretary Teresa Cheng and Health Secretary Sophia Chan.

The territory's activities to mark National Day is a muted affair this year, with the fireworks show cancelled and the flag-raising ceremony to be viewed indoors as with celebrations on July 1.

This, as Hong Kong has been roiled in 17 straight weekends of protests, of which most ended up in clashes between police and protesters.