HANOI (WASHINGTON POST, AFP) - North Korean leader Kim Jong Un arrived in Hanoi to throngs of cheering crowds and curious onlookers on Tuesday (Feb 26), on the eve of a second summit with United States President Donald Trump that the world is closely watching for tangible progress over the North’s nuclear programme.

Wearing his trademark Mao-style black suit, Mr Kim disembarked from his personal olive green armoured train at 8.22am at Dong Dang station after a 65-hour, 4,000km train journey from Pyongyang through China.

Emerging from the station, he was greeted by Vietnamese officials, chatting briefly and smiling. He was handed a bouquet of flowers and shook hands with a line of officials and military officers before walking past an honour guard dressed in white uniforms.

Ms Kim Yo Jong, his younger sister, was also seen getting off the train. Also there to meet the North Korean leader were Mr Kim Hyok Chol, who is the recently appointed counterpart of US North Korea envoy Stephen Biegun, and Mr Kim Chang Son, who is Mr Kim Jong Un’s de facto chief of staff.

Mr Kim was ushered into a waiting black Mercedes-Benz, his arm emerging from a rolled-down window to wave to crowds before briefly stopping in front of a group of students in school uniforms gleefully brandishing North Korean and Vietnamese flags.

Twelve bodyguards jogged alongside Mr Kim’s car as he left the train station, for Hanoi.

His motorcade was greeted in Hanoi by cheering crowds behind barriers near the colonial-era pastel yellow Hanoi Opera House before he arrived at the Melia hotel where he was expected to stay this week.

After a few hours’ rest, he then departed his hotel for the North Korean embassy in Hanoi, echoing the summit in Singapore where he took in the sights on an unscheduled sortie.

Mr Trump was taking a more conventional route on Air Force One to the meeting and arrived in Hanoi shortly after 9pm local time on Tuesday (10pm Singapore). He had tweeted as he left for Vietnam that he was looking forward to a “very productive” second summit.

The US president again dangled the carrot of economic progress for North Korea if it gives up its nuclear programme. “With complete Denuclearisation, North Korea will rapidly become an Economic Powerhouse,” tweeted Trump. “Without it, just more of the same.” “Chairman Kim will make a wise decision!”

Relations between the two mercurial leaders have undergone a dramatic turnaround, from flinging personal insults and threats of destruction to Mr Trump declaring he had fallen “in love” with Mr Kim through an exchange of letters.

But many North Korea watchers dismissed the Singapore summit as political theatre that failed to produce a concrete roadmap to denuclearisation and stressed the Hanoi meeting must deliver more.

“The window for diplomatic progress with North Korea will not remain open indefinitely. The second summit... must emphasise substance over pageantry,” said Ms Kelsey Davenport from the Arms Control Association. Dong Dang station had been cordoned off since Monday, with soldiers and police positioned outside and officials staging a dress rehearsal. Armed guards and sniffer dogs have been spotted at the station, which got a last-minute facelift with licks of fresh paint and new potted plants for Mr Kim’s brief welcoming ceremony.

The entire road from the border town to the capital was closed from 6am to 2pm local time on Tuesday.

Ms Hoang Thi Thuy, a local official from the Dong Dang women’s union, said she had waited in the cold rain since before dawn for a glimpse of Mr Kim. 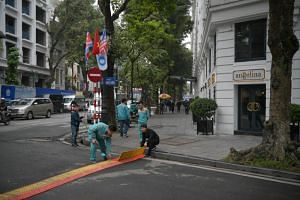 “I was so excited when we were told to stand in place for the arrival of the train... When the train arrived, we saw the leader from afar. Seeing that, I felt so happy. It’s hard to describe,” said Ms Thuy.

Mr Kim flew to his last summit meeting with Mr Trump in Singapore, but North Korea prefers its leaders to stay grounded if at all possible. Mr Kim Jong Un’s four visits to China in the past year were all by train, and his father, Mr Kim Jong Il, was rumoured to have a fear of flying.

Carrying heavy armour and with bulletproof black-tinted windows, the train is believed to travel at an average speed of about 56kmh.

A South Korean media report based on intelligence reports and defectors’ accounts said it contains conference rooms, an audience chamber, an office with TV screens and satellite phones, and bedrooms.

Japan’s Nihon Keizai Shimbun reported that it also carries a small helicopter in case of emergencies.

Mr Kim’s summit with Mr Trump is scheduled to begin with a private dinner on Wednesday evening, the White House announced, followed by a series of official meetings on Thursday.

Mr Trump will be joined by Secretary of State Mike Pompeo and acting White House Chief of Staff Mick Mulvaney for the dinner. Mr Kim will also have two aides present, and both men will have translators.

Mr Trump is scheduled to meet Vietnam’s President and Prime Minister on Wednesday before his dinner with Mr Kim.

Mr Kim’s schedule in Vietnam has not been publicly announced. Diplomats based in Hanoi said Mr Kim might visit the industrial town of Haiphong and the nearby picturesque tourist site of Ha Long Bay, where limestone karsts rise out of emerald seas.

But a rumoured trip to a factory operated by South Korean electronics giant Samsung north of Hanoi now appears unlikely, one official said.

Mr Kim is thought to be keen to develop North Korea’s economy, especially by promoting tourism and by attracting foreign investment into special economic zones.

The US and South Korean governments also want to encourage him to follow Vietnam’s path from socialism to free-market economics, and his side trips could encourage the notion that he might want to move North Korea away from state socialism and self-reliance.

But many experts say there is no sign that he has any intention of relaxing his state’s vice-like grip on its people or allowing foreign influence to spread. Vietnam’s incredible opening to the world undertaken over the past three decades is unlikely to be a path for North Korea to follow.

The rapidly developing communist country has embraced Washington in recent years as it seeks to counterbalance its long-standing, but often antagonistic and sometimes hostile, relationship with Beijing.

As word of a potential second summit between Mr Kim and Mr Trump circulated last year, Vietnamese officials quickly proposed to play host, diplomats said. The interest Vietnam’s leaders have in providing a forum to reduce tensions between the two sides appears to have public support as well.

In interviews with shopkeepers along the Old Quarter’s bustling streets and sidewalks, vendors expressed support for peaceful diplomatic dialogue and one T-shirt printer said he sold more summit shirts to locals than to foreigners.

“On his train trip back, Chairman Kim can drop by Beijing and debrief President Xi Jinping on the outcome of the second summit,” said Dr Cheong Seong-chang, an expert at South Korea’s Sejong Institute. “Kim is expected to reassure Xi about his commitment to denuclearisation talks and ask for military and economic support from China.”

The US’ main allies in Asia, South Korea and Japan, may have to wait longer for face-to-face debriefs.

Mr Trump will fly straight back to Washington after the summit, while Mr Pompeo will take a plane to the Philippines.