HANOI (AFP) - When Mr Lee Parry heard that North Korean leader Kim Jong Un and United States President Donald Trump would meet in Hanoi, he knew he wanted to be part of the action and soon booked a trip.

He joined the "Trump-Kim Vietnam Summit Tour" being put on this week by a travel company whose slogan offers "destinations your mother would rather you stayed away from" - including North Korea.

The trip to the Vietnamese capital is not exactly a daring one, but a chance for visitors to be part of the flurry surrounding Mr Trump and Mr Kim's second meeting this week.

"It's a lot better than seeing it on Twitter or Facebook," said Mr Parry, 36, a British student living in China.

"To be at the forefront of that and to get to see it in the flesh was too good to pass up."

On the agenda are several well-trodden stops on the Hanoi tourist trail: The Ho Chi Minh mausoleum, the war museum and the former "Hanoi Hilton" jail where American prisoners of war, including Mr John McCain, were held during the Vietnam War.

Also included are some summit-specific sites such as the Melia Hotel, where Mr Kim is expected to stay. 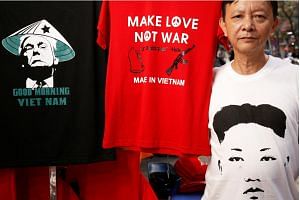 As Trump and Kim prepare for summit, bars in Vietnam serve 'Peace Negroniations'

Trump-Kim summit: Vietnam as both host and role model for North Korea

YPT is the firm that took US student Otto Warmbier to North Korea, where he was convicted of subversive activities for trying to steal a propaganda poster and detained for 18 months, dying shortly after being released.

The Vietnamese capital's streets were lined with armed soldiers and military vehicles - highly unusual for a foreign leader's visit to the country.

Hanoi's historic downtown was also packed with well-wishers who, like the YPT group, were eager to witness history.

For some, it was a repeat affair.

"I went to Singapore for the first summit and now I'm here because I'm just wishing for the best. I hope they make a good connection here," said a South Korean tourist, waving the Vietnamese flag.

The city has been swarming with press in recent days, with some 2,600 journalists registered to cover the summit on Wednesday and Thursday.

Joining the media frenzy was part of the appeal for Mr Neel Sapre, an Indian sales manager on the tour.

"It was awesome. I've never seen so many press people at one location so it was fun being among the hype," he told AFP in Lenin Square, beneath a statue of the Soviet revolutionary.

Vietnam's national railway service got in on the action too, offering all journalists registered to cover the summit free train travel until the end of March.

Also seeking to make the most of the event, Vietnam will unveil a "special stamp collection" on Tuesday to mark the Hanoi summit.