HANOI - As 100 or so journalists stake out the Melia Hanoi hotel in downtown Hanoi and another group keeps watch some 10km away at the J. W. Marriott, workers at the Sofitel Legend Metropole Hotel have been giving the colonial building a last scrub.

All signs point to this iconic neo-classical hotel being the venue that will host denuclearisation talks between United States President Donald Trump and North Korean leader Kim Jong Un on Thursday (Feb 28).

Satellite vans belonging to national broadcaster Vietnam Television were parked next to the hotel on Tuesday, while technicians were laying cables into the building for live feeds.

It was a similar arrangement during the Singapore summit, when national broadcaster Mediacorp was responsible for providing live feeds from the summit venue of Capella hotel to other broadcasters around the world.

Guards bearing official DPRK-US Summit tags were stationed at both entrances of the hotel while staff members scrubbed the outside of the building.

Mr Trump and Mr Kim will meet on Wednesday evening for a brief one-to-one session, followed by what the White House calls a "social dinner" where Mr Trump will be joined by Secretary of State Mike Pompeo and acting chief of staff Mick Mulvaney, and Mr Kim by his right-hand man Kim Yong Chol and another aide.

Negotiations are scheduled to take place only on Thursday.

Mr Kim crossed the border by train from China earlier on Tuesday after making an epic 4,000km journey from Pyongyang. A Chinese foreign ministry spokesman confirmed on Tuesday that China had provided "transport security" to Mr Kim and his entourage. 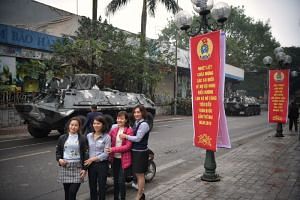 At the border train station of Dong Dang, Vietnamese officials gave him a red carpet welcome before his motorcade made the two-hour journey to the capital's Melia Hanoi hotel, where the delegation is staying.

Roads leading to the hotel have been barricaded while armed special forces stand guard.

Mr Trump will arrive on Tuesday night and will have a day of bilateral meetings with Vietnamese leaders on Wednesday.

He is expected to stay at the J. W. Marriott Hotel. Residents told The Straits Times that armed special forces arrived on Monday afternoon and have taken positions around the hotel.

Restaurants located opposite the hotel were told to close for six days for security reasons.

A woman working at one restaurant was not happy about the closure. She said special forces personnel caused some disruption when they arrived, but did not elaborate. "I'm not really excited about the summit, I have other things to do," she said.