TOKYO (BLOOMBERG) - The spreading coronavirus has health officials from the United States to Europe searching for answers. To find them, they could look to the experience of Asia, which has been battling the deadly pathogen since January - with some success.

In a little over two months, the highly contagious disease has travelled from its epicentre in Wuhan, China to at least 108 countries, sickened over 119,000 and killed more than 4,200 people. Governments everywhere are struggling to curb outbreaks, locking down their borders and shutting down large parts of their economies.

Even before Covid-19, China, Hong Kong and some South-east Asian nations had weathered the outbreak of severe acute respiratory syndrome (Sars) in 2003 and, more recently, the onset of Middle East respiratory syndrome (Mers) and swine fever, giving them experience in tackling the spread of infectious diseases, said Professor Kenji Shibuya of King's College London and former chief of health policy at the World Health Organisation.

"They have accumulated knowledge and practices, so there's room for other countries to learn from these experiences."

While it's too early to say the coronavirus is defeated in Asia - even with China claiming its epidemic has peaked - the Asian experience can be instructive for Western nations now facing down the threat.

This is how they're doing it:

"No matter how your health systems or political systems are organised, the keys to epidemic control remain the same" - test, trace, isolate and inform, said Prof Jessica Justman, a professor of medicine in epidemiology at Columbia University.

South Korea, which has the highest infection tally in Asia outside of China, is testing more than 10,000 people a day, the fastest pace globally.

Researchers there began developing a virus test kit at the end of January - when South Korea had fewer than 10 infections - aided by a fast-track regulatory approval system that was set up after the Mers outbreak in 2015.

Efficient testing has allowed South Korea to isolate and treat infected people early, thereby slowing the virus' spread and lowering the mortality rate to less than 1 per cent.

On the other hand, Japan drew criticism for not testing enough people, which raises the prospect of scores of undetected infected people remaining un-quarantined and spreading the virus more widely. There is rising concern that the United States is facing such a quandary as it emerges that the pathogen has been circulating for much longer than known in some states.

More testing, not less, is needed to investigate how the virus is spreading or if it starts adopting new transmission mediums, the WHO's China Representative Gauden Galea said in an interview on Monday (March 9).

Coronavirus: Can South Korea be a model for virus-hit countries?

China stunned the world when it put Hubei province, along with its capital Wuhan city, in a lockdown in late January, effectively quarantining 60 million people in an unprecedented move aimed at curbing the outbreak.

Research has shown that the measure did slow the spread of the coronavirus overseas. The lockdown of Wuhan likely reduced overseas transmission of the virus by almost 80 per cent, according to a paper published in the journal Science on March 6 by a team led by researchers at Northeastern University.

Italy went a step further than China this week, becoming the first country to attempt a nationwide lockdown. New York has ordered a containment around New Rochelle, where a cluster of infections originated.

The policy is not a cure-all, and has been criticised for its social cost. In Hubei, the local medical system became overwhelmed and was unable to deliver basic care, causing widespread pain for residents.

Social distancing - cancelling mass events and closing down places where people gather - is often cited as one of the most effective measures of containing an outbreak by public health experts, with proven results that go as far back as the influenza pandemic of 1918.

Coronavirus: How flattening the epidemic curve will buy time and keep outbreak in check

Outside of China, Hong Kong took the most drastic measures early on by shutting down schools in late January. That order remains in place, and Japan followed suit a few weeks later. Governments as well as companies across the region also called off trade conferences to film festivals, with some sporting events cancelled or held without spectators.

Pre-emptive, low-cost measures like social distancing and campaigns to encourage stricter hygiene can help rein in infection rates, according to a paper from Australian researchers last week.

Such efforts depend on the public buying in, which can come more easily in Asian countries with more authoritarian governments, or cultures where social harmony is emphasised.

"Social distancing is likely to be less top-down in the US," said Dr Eran Bendavid, an infectious disease specialist at Stanford Medicine. "That puts a greater onus on individuals and communities."

The coronavirus' spread in developed Asian territories has allowed both governments and app developers to harness technology as part of the response. Transparent, timely public information also helps allay people's fears and anxiety. 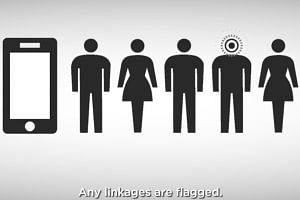 Coronavirus: How contact tracers track down the people at risk of infection

Singapore has similar tracking measures, along with extensive contact tracing, and punitive measures for those who disobey mandated quarantines or lie about their travel history.

Developers in South Korea used government data and news reports to make websites and apps that allowed users to check if there were coronavirus cases in their vicinity. The Hong Kong Department of Health created a map dashboard that lets residents track cases and where they were discovered.

This, however, requires the digitalisation of government records and healthcare data, and a wide use of smartphones, Prof Shibuya at King's College said.

Data privacy may also be a more sensitive issue in Europe and the US compared to some parts of Asia. China's even-stricter surveillance of its citizens through the outbreak is raising ethical concerns.

Potentially infected patients may be wary of seeking treatment, fearing the cost or missed days at work, which could scuttle disease mitigation efforts.

The best approach, experts say, is for governments or insurers to cover the testing costs. Such a measure has shown results: Thailand provided free testing and treatment of high-risk patients, which incentivised people to come forward. As of Wednesday, about 95 per cent of over 4,800 patients under investigation came to hospital voluntarily, according to the country's health ministry.

In Japan, the government had to issue several calls for companies to allow workers to take sick days instead of using vacation days. The US is also grappling with similar issues around paid sick leave.