SINGAPORE - Many who have been following the latest developments of the global coronavirus outbreak will have noticed doctors, healthcare professionals and government officials in recent days increasingly refer to a curve that needs flattening.

Called an epidemic curve, it is used to visualise when new cases happen and at what speed during a virus outbreak.

This simple n-shaped curve presents the stark reality of how quickly a virus can spread if unchecked, and the importance of intervening in a timely and decisive fashion.

As the number of patients diagnosed with Covid-19 continues to rise with the World Health Organisation declaring the outbreak a pandemic, so does the risk of healthcare systems in various countries being overwhelmed by the demands placed on them.

But not all those diagnosed with the respiratory disease have severe symptoms.

To ensure that hospital and healthcare resources are diverted to the group of people who need them the most - usually the elderly and those with underlying medical conditions - experts around the world have urged low-risk coronavirus patients not to overwhelm hospitals by self-isolating instead if infected.

Singapore has not reached that stage yet, though if a spike happens, it may have to reconsider how it treats those infected.

As of Thursday morning (March 12), 178 patients have been diagnosed with the disease in Singapore. Of these, 96 have been discharged.

Currently, all Covid-19 patients in Singapore are kept in hospitals for long periods to ensure they are free of the virus before being discharged.

Avoiding infection is also key to ensuring healthcare systems can cope during the outbreak, and people can do their part by regularly washing their hands, maintaining personal hygiene by disposing of their own used tissue papers, and avoiding unnecessary physical contact such as shaking hands, say experts and public health authorities.

What does the epidemic curve show?

The number of infections in a viral outbreak tends to follow a particular pattern over time, and this is the picture painted by the epidemic curve.

Deep implications for Singapore as Covid-19 is termed a pandemic

The coronavirus is now a pandemic - what does this mean for us?

As The Washington Post reported, a key goal of public health officials is to avoid a huge peak in Covid-19 cases (a curve with a steep incline spread over a shorter period of time) in favour of a slower growth that becomes a moderate plateau (a curve with a gentler incline, spread out over a longer time period).

If the same number of cases is spread over a longer time period, health systems stand a better chance of being able to cope, experts told news agency Agence France-Presse.

The gentle increase in cases gives health systems the time to adapt and absorb the new patients, ensure that the virus is not spread further and effectively treat the most vulnerable, said the Post.

What are the three phases?

Phase 1: At this stage, infected patients are mostly imported, with people who have contracted the virus in one country travelling elsewhere, said microbiologist Siouxsie Wiles, an associate professor at the University of Auckland, in an opinion piece published on New Zealand news site The Spinoff.

She wrote: "Think of Covid-19 as several fires blazing away, with embers shooting off in all directions. Our goal is to stop those embers from turning into another blazing fire. It's beginning to look like anyone who has travelled overseas recently should think of themselves as a potential ember and be on the lookout for symptoms."

Phase 2: Community transmission begins as infected patients continue about their daily activities instead of staying isolated.

The rate of increase is important in this phase, and this is the part of the curve which public health officials are looking to flatten by keeping the number of cases reported each day as low as possible.

As Prof Wiles noted: "The quicker and higher the numbers rise, the more likely the outbreak will overwhelm us, making it harder to control." 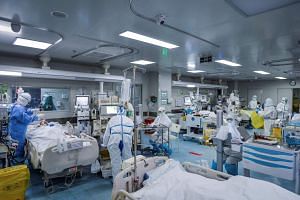 Phase 3: The number of new cases starts to approach zero. This could be because a vaccine has been introduced or in the worst-case scenario, when everyone has been infected. A licensed Covid-19 vaccine will only be ready by the end of this year at the earliest, according to medical experts around the world.

Why is it important for the curve to be flattened?

Flattening the curve will, in a way, help to buy time.

National Development Minister Lawrence Wong, who co-chairs Singapore's multi-ministerial task force set up to combat the spread of Covid-19, had said at a press conference last week (March 6): "Slowing down the spread and flattening the epidemic curve is very useful, because we avoid overwhelming our hospitals with a surge of cases, and we buy ourselves time - time that will be very useful because over the longer term, we may have better treatment, better anti-viral drugs and, eventually, a vaccine may be in place."

If the number of new cases goes up suddenly and dramatically, there will be a greater burden on hospitals and healthcare professionals in the area. Doctors will, for example, be placed in the unenviable position of deciding which patient gets a bed in the hospital, or who should be directed to the intensive care unit.

When hospitals struggle to provide adequate care to each patient, this can increase the mortality rate.

Hospitals in Wuhan - the epicentre of the outbreak - had faced a grim situation, with patients lying - and dying - on hospital floors for lack of beds, and health workers crumbling from exhaustion. In Lombardy, the worst-hit region in Italy, hospitals began to run out of beds in intensive care units as of March 9.

As Dr Philippe Devos, a Belgian emergency-medicine physician, said: "Up to now, people have the impression that this disease poses an individual danger, when in fact the danger is for the population as a whole."

He told AFP: "With very rare exceptions, young people are not dying, but when they clog up hospitals they are taking the place of others who will die without proper treatment."

The state of Singapore’s cleanliness | The Straits Times

Which phase is Singapore in?

Based on Prof Wiles' classification of the phases of the outbreak, Singapore is in Phase 2, since community transmission has already occurred here.

However, the number of new Covid-19 cases reported here every day is much smaller compared with the surge of hundreds to thousands of new cases in other countries.

This number has also remained very stable, with new cases in the last five days since March 7, for example, standing at eight, 12, nine, six and 12 respectively. This means Singapore's "curve" more resembles a straight line at this point.

Dr Ong Siew Hwa, a cell biologist, said Singapore’s strict containment measures have helped flatten the curve somewhat, in that the healthcare system here did not become overwhelmed by the growing number of cases.

However, she noted that it was too soon to say if Singapore has the outbreak under control.

Dr Ong, who is director and chief scientist of Acumen Research Laboratories, a home-grown company which has developed a diagnostic test kit for the virus, said epidemic curves are best plotted after an outbreak is over, since there are many factors affecting how the disease spreads.

Covid-19 outbreak will continue for a year or longer; more stringent measures may need to be put in place, says PM Lee

Why staying home when unwell can save lives

Even now, much is still unknown about the basic biology of the virus, such as the modes of transmission and whether patients could spread the virus even if they do not show any symptoms, she noted.

Added Dr Ong: “Different countries, cities and territories all have different epidemic curves as this depends on local factors such as size of the area, population density, policies and availability of healthcare infrastructure, as well as the infected people being socially responsible.”

In comparison, the number of confirmed infections in Italy between March 7 and March 11 increased by 6,579, an exponential jump from 2,600 new cases between March 2 and March 6.

Singapore has aggressively sought to contain the virus through testing, contact tracing and quarantines.

It has put social-distancing measures in place, including suspending all social activities organised by government agencies for seniors for 14 days from Wednesday (March 11).

Individuals too can also play a part.

As Professor Carl Bergstrom from the University of Washington said on Twitter: "Through aggressive sanitation efforts, diligent hand-washing, cancelling large gatherings, minimising travel, teleworking, and similar measures we can flatten out the epidemic curve, keeping the number of people simultaneously infected at a low enough level to be manageable." What are other countries are doing to flatten the curve?

China: The epicentre of the outbreak, with over 80,000 cases and 3,000 deaths, has been under an extensive lockdown to curb the spread of the coronavirus, including strict quarantine and travel restrictions for hundreds of millions of citizens and foreigners.

The lockdown has begun to ease slightly with the number of new cases in China falling dramatically. The country reported 15 new cases on Wednesday, down from 2,000 a day when the outbreak was at its peak last month.

Iran: Iran and Italy are currently the two worst-hit countries besides China by the coronavirus. Unlike China, however, the number of infections in both countries is still continuing to rise steadily daily.

Iranian President Hassan Rouhani initially dismissed the severity of the Covid-19 outbreak, saying last month that it was no worse than other epidemics that Iran has suffered.

Coronavirus 101: What do you want to know?

He also said that the country would only quarantine individuals and not cities or regions, a decision which has since been questioned by Iranian Parliament members who have called for infected areas to be quarantined and offices to be closed.

Iran reported 63 new deaths on Wednesday (March 11), its highest single-day total yet, as its number of infections reached 9,000.

Italy: Italy appears to be approaching the top of its epidemic curve as China earlier this year, with 2,300 new cases diagnosed on Wednesday to bring its total to more than 12,400 cases, along with 827 deaths.

It followed in China's footsteps by implementing a country-wide lockdown on Tuesday, with all non-essential travel in the country banned, and schools and universities closed.

The restrictions, which also include the suspension of all sporting events, will run until April 3.

However, it may still be some time before a decline in cases will be seen, going by China's experience.

After the Wuhan and Hubei province-wide lockdowns were imposed on Jan 23 and 24 respectively, it was not until the middle of February that the rate of new cases in Hubei began to slow down noticeably.