The release on Thursday of the report, albeit with passages blacked out, into the investigation of suspected Russian interference in the 2016 US election will be a milestone in Mr Donald Trump's tumultuous presidency.

Democrats reacted angrily to news that White House and Justice Department lawyers had conferred ahead of its release, and complained about Attorney-General William Barr's plans to hold a news conference to discuss the report more than an hour before Congress or the public gets a chance to see it.

Mr Barr will speak to reporters at 9.30am local time (9.30pm Singapore time) along with Deputy Attorney-General Rod Rosenstein, who appointed Mr Mueller as special counsel in May 2017. But copies of the report will not be delivered to Capitol Hill until between 11am and noon, a senior Justice Department official said.

Democrats said Mr Barr, a Trump appointee, would be trying to shape the public's views of the report during his news conference before anyone had a chance to draw their own conclusions.

"The attorney-general appears to be waging a media campaign on behalf of President Trump," US House of Representatives Judiciary Committee Chairman Jerrold Nadler told reporters in New York on Wednesday.

"Rather than letting the facts of the report speak for themselves, the attorney-general has taken unprecedented steps to spin Mueller's nearly two-year investigation," Mr Nadler said. 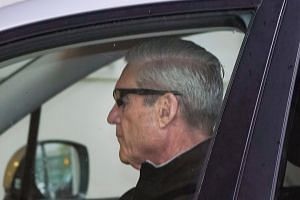 US attorney-general to release redacted Mueller report on April 18

The New York Times, which cited people with knowledge of the discussions, said the conversations had helped the President's legal team prepare for the release of the report and strategise for the public relations and political battles that are certain to follow.

The Justice Department declined to comment on the New York Times report. Trump lawyers Jay Sekulow and Rudy Giuliani did not immediately respond to requests for comment.

When Mr Mueller's report is released, close attention will be given not only to potential new details on the Trump campaign's contacts with Russia and the question of whether the Republican president acted to impede the inquiry, but also on how much Mr Barr elects to withhold.

Mr Barr is expected to release a redacted version of the report, but congressional Democrats could move forward quickly - as early as Monday - with subpoenas to obtain the full version.

The Democratic-led Judiciary Committee voted on April 3 to authorise Mr Nadler to issue subpoenas to the Justice Department to obtain Mr Mueller's unredacted report and all underlying evidence, as well as documents and testimony from five former Trump aides.

A source familiar with the matter said Mr Nadler could issue subpoenas as early as Monday. Mr Nadler told reporters in New York the committee would have to carefully read the report "but on the assumption that it is heavily redacted, we will most certainly issue the subpoenas in very short order".

Mr Barr, who has broad authority to decide how much of the report to release, has promised to be as transparent as possible, but told lawmakers he would redact four categories of content: secret grand jury information, intelligence-gathering sources and methods, information relating to active cases, and information that could affect the privacy of "peripheral third parties" who were not charged.

Certain members of Congress will be able to see a less-redacted version of the report, Ms Jessie Liu, the US attorney for the District of Columbia, said in a court filing on Wednesday. 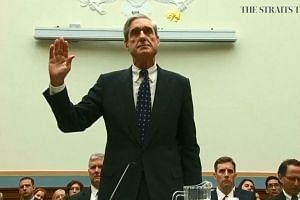 "The Justice Department plans to make available for review by a limited number of members of Congress and their staff a copy of the special counsel's report without certain redactions," she said.

"The Justice Department intends to secure this version of the report in an appropriate setting that will be accessible to a limited number of members of Congress and their staff," she said.

The redactions, to be colour coded to reflect the reason they were omitted from the final report, have Democrats seeing red.

They have expressed concern that Mr Barr, appointed by Mr Trump after the president fired former Attorney-General Jeff Sessions, could black out material to protect the president.

Mr Mueller on March 22 submitted to Mr Barr a nearly 400-page report on his 22-month investigation into whether the Trump campaign worked with Moscow to sway the election in his favour, and whether Mr Trump committed obstruction of justice with actions to impede the inquiry.

In a letter to lawmakers two days later, Mr Barr said Mr Mueller did not find that members of Mr Trump's campaign engaged in a criminal conspiracy with Russia. Mr Barr said he determined there was not enough evidence to establish that Mr Trump committed the crime of obstruction of justice, though Mr Mueller did not exonerate Mr Trump on obstruction.

Since then, Mr Trump has set his sights on the FBI, and accused the Justice Department of improperly targeting his campaign.

Last week, Mr Barr told a US Senate panel he believed "spying" did occur on Mr Trump's campaign, and he plans to investigate whether it was properly authorised.

A federal judge criticised Mr Barr during a hearing on Tuesday on a Freedom of Information Act lawsuit demanding access to the Mueller report, according to media reports.

"The attorney-general has created an environment that has caused a significant part of the public to be concerned about whether or not there is full transparency," US District Court Judge Reggie Walton was quoted as saying.

Mr Walton said he could ask to review the full document after a redacted version is released, but denied a request by a media outlet, Buzzfeed News, to speed up the process.