It will almost certainly provide a blueprint for slew of follow-up hearings by House, say analysts

Washington is bracing itself for details from the long-awaited report of Special Counsel Robert Mueller on Russia's interference in the 2016 presidential election.

Attorney-General William Barr is due to brief congressional leaders over the weekend on key findings from the report delivered on Friday.

There is initial triumphalism in conservative circles over the fact that, according to Department of Justice officials, no new indictments are forthcoming in the probe.

Republicans flocked to declare President Donald Trump exonerated of suspicions of colluding with Russia to get elected. And any attempt to impeach the President appears to be off the table.

But analysts are already calling the report only the end of the beginning, as it will almost certainly provide a blueprint for a slew of follow-up hearings and investigations of the President and his inner circle's policy decisions, financial interests and personal relationships, by the Democratic-controlled House.

This would be on top of other ongoing investigations into the President and the family's Trump Organisation. On Friday, Reuters reported a source as saying Mr Trump's son-in-law and top aide Jared Kushner is cooperating with at least one of those investigations, by the House Judiciary Committee. 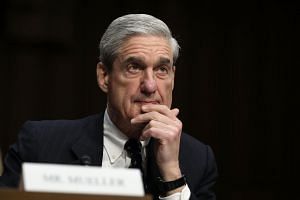 Mr Trump himself has long denied collusion, calling the investigation a witch hunt, even as the wide-ranging process produced indictments of 34 people and the conviction of five former Trump associates on various criminal charges ranging from money laundering to conspiracy against the country. Twenty-six of those individuals or entities indicted are Russian.

A clamour to make the Mueller report public erupted following its delivery to the attorney-general, almost two years after the special counsel's investigation began. Mr Barr informed congressional leaders in a letter that he may brief them on the report's "principal conclusions" over the weekend.

"I remain committed to as much transparency as possible, and I will keep you informed as to the status of my review," he said.

With only key findings expected to emerge, details may not be known until part or all of the report is released to the public.

In a joint statement, Democratic Party leader Nancy Pelosi and Senate Democratic leader Chuck Schumer urged Mr Barr to "make the full report public and provide its underlying documentation and findings to Congress" without giving Mr Trump or his attorneys a preview of the report.

Senator Amy Klobuchar, one of six Senate Democrats who have announced a run for the party's presidential nomination next year, tweeted: "Attorney-General Barr must release the full report to the public. The American people deserve to know the facts."

And congressman Adam Schiff said House committees could subpoena the report and also Mr Mueller to testify on its revelations.

But Republican congressman Mark Meadows tweeted: "The Mueller report delivery suggests no more indictments are coming from the Special Counsel. If that's true, it would mean we just completed two years of investigating 'Russian collusion' without ONE collusion-related indictment. Not even one. Why? Because there was no collusion."

A top Democrat vows to subpoena Mueller report if necessary

Republican congressman Steve Scalise, in a statement, said reports that no indictments have been recommended "confirm what we've known all along: There was never any collusion with Russia".

Analysts say not making the report public will only fuel speculation about what is being hidden. A February poll by the Washington Post found more than 80 per cent of Americans wanted the entire report made public.

Separate polls have found there is wide confidence in the fairness of the investigation. Mr Mueller is widely respected notwithstanding attacks on him by Mr Trump, who said just last week: "I had the greatest electoral victory… and now somebody's going to write a report, who never got a vote. So we'll see what the report says. Let's see if it's fair."

WASHINGTON • The special counsel's report is complete, 675 days after Mr Robert Mueller was named to oversee the investigation into Russia's election interference, whether any associates of President Donald Trump coordinated with that plot and whether the US leader tried to obstruct justice.

Attorney-General William Barr, who now has the document, has notified lawmakers. But it has yet to be made public, and the path to its potential release - or the release of the facts it contains - is complicated.

WILL THE REPORT BE MADE PUBLIC?

That remains to be seen. Some information is expected to come out because Mr Barr has to update Congress, but that does not mean the entire report will be made public.

Mr Barr sent a letter to the leaders of Congress' judiciary committees that the special counsel investigation has been completed, which he is required to do.

The special counsel regulation sets no timeframe or deadline for when Mr Barr must provide this information to Congress.

WILL CONGRESS BE SATISFIED WITH A BARE-BONES REPORT?

No. Senator Dianne Feinstein of California, the top Democrat on the Senate Judiciary Committee, has already called for the entire report, without redactions, to be provided to lawmakers.

And the House overwhelmingly passed a resolution calling for the report to be made public - a largely symbolic move to pressure Attorney-General Barr to publicly release it.

Democrats in the House have also made the case that seeing the report in its entirety is critical to their ability to conduct oversight and determine whether to move forward with impeachment proceedings.

WHAT IF THE ADMINISTRATION REJECTS CONGRESS' REQUESTS?

Lawmakers have a few options to try to make public details of the investigation, though some could involve years of litigation.

They could start issuing subpoenas to Mr Barr, who could ignore them or refuse them. They could also subpoena Mr Mueller's testimony. The Justice Department is likely to resist those demands.

Lawmakers can also use their bully pulpits to pressure Mr Barr publicly for more information and tie up the Justice Department in hearings and subpoena fights that last for the rest of Mr Trump's time in office.

WILL THE PRESIDENT EVEN SEE THE REPORT?

That is not clear. Mr Trump is Mr Barr's boss, and there is nothing to stop Mr Barr from immediately sharing the report with the White House. But doing so would violate the Justice Department's longstanding independence from the White House.

And if the Mueller report includes grand jury testimony, which is protected under federal law, the number of people permitted to see the report shrinks significantly.

Mr Trump, as President, would be permitted to see it in certain circumstances.

WHAT IF TRUMP TWEETS INACCURACIES ABOUT THE FINDINGS?

Even if Mr Mueller and Mr Barr know that what Mr Trump is saying publicly is not true, there is no apparent legal duty for the Justice Department to correct the President.

WILL THIS BE THE FINAL WORD ON "COLLUSION"?

Unlikely. First, collusion has no legal definition, though it has become a shorthand for reference to the Russia investigation.

A key question in the special counsel investigation concerns whether Mr Trump or his campaign was coordinating with Russia to try to affect the outcome of the 2016 presidential election.

If Mr Mueller's investigation ends without charging Mr Trump or his aides with conspiracy, some may interpret that to be a "no collusion" finding.

Mr Trump consistently cites government officials and the lack of collusion charges as evidence that there was never collusion between his campaign and Russia.

A version of this article appeared in the print edition of The Sunday Times on March 24, 2019, with the headline 'Mueller report done but it's not end of probe into Trump'. Subscribe
Topics:
More
Whatsapp Linkedin FB Messenger Telegram Reddit WeChat Pinterest Print Purchase Article Copy permalink