CARACAS (REUTERS) - Venezuelan opposition leader Juan Guaido appeared alongside armed, uniformed men on Tuesday (April 30) in his strongest call yet to the military to abandon President Nicolas Maduro, a day before planned mass protests aimed at toppling the socialist leader.

In the more than three months since Mr Guaido invoked the constitution to assume an interim presidency, citing fraudulent elections, Mr Maduro has so far kept a grip on the levers of power including the military and security forces.

Mr Guaido says Mr Maduro must step aside for a transitional government to organise new elections. Mr Maduro has resisted calls for an early vote or that he leave power early before his six-year second term ends in 2025.

Below are some of the factors that could decide who prevails.

Venezuela has a long history of military rebellions and coups, notably the 1958 overthrow of dictator Marcos Perez Jimenez, and the failed attempt by Mr Maduro's predecessor, Hugo Chavez, to take office by force in a 1992 army coup. After being elected to office, Mr Chavez himself survived a putsch a decade later.

Now Mr Guaido is seeking a widespread army uprising against Mr Maduro, who has overseen a 50 per cent collapse in the economy and shortages of food and medicine that have led more than 3 million Venezuelans to leave the country since he took office in 2013.

Although the young opposition leader was accompanied at a rally in Caracas on Tuesday by several dozen armed troops, it did not immediately appear that he had won much support from the country's 200,000-strong armed forces, and 25 of the soldiers with him later sought refuge in the Brazilian embassy. 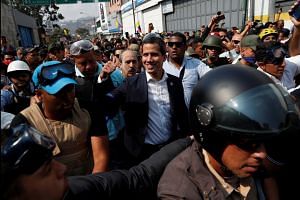 Venezuelans march to demand power, water and an end to Maduro

Since declaring himself interim president in January, Mr Guaido has repeatedly made overtures to the military, offering an amnesty from prosecutions if they join him, with only marginal success.

Several hundred soldiers have defected and left the country for Brazil or Colombia in recent weeks but not in numbers high enough to threaten Mr Maduro's grip.

One risk is that a military split leads to prolonged violence among different armed factions.

Mr Maduro's offer of negotiations with Mr Guaido, moderated by the Vatican, Mexico or Uruguay, has been rejected by the opposition, which says previous rounds of talks allowed the government to stall for time without making any real concessions.

While some 50 nations, including the United States, have declared support for Mr Guaido, Mr Maduro still has powerful backers, notably Russia and China. Others allies include Cuba, Iran and Turkey.

US national security advisor John Bolton has called on Russia to drop its support for Mr Maduro, which includes military advisers.

While some believe Moscow could negotiate an exit and safe passage out of Venezuela for the president, there are few signs Russian leader Vladimir Putin is willing to give up on the government that gives him most geo-political clout in the Americas.

US Secretary of State Mike Pompeo told CNN on Tuesday that Mr Maduro was prepared to leave Venezuela on Tuesday morning but reversed his plan after Russia said he should stay.

Mr Bolton said on Tuesday the opposition had won commitments from leading members of Mr Maduro's administration that the president had to go, but there was no public sign of high-level splits within the government that could lead to a transition.

Mr Erik Prince - the founder of private security firm Blackwater and a supporter of US President Donald Trump - has been pushing a plan to deploy a private army to help topple Mr Maduro, sources told Reuters.

Mr Prince's pitch will only add to speculation that the United States, while unlikely to invade Venezuela to bring down Mr Maduro, might resort to irregular military action, such as the kind of intelligence service-backed covert operations used by Washington a number of times in 20th-century Latin America.

A person familiar with the Trump administration's thinking said the White House would not support such a plan.

Although some former Venezuelan security officials opposed to Mr Maduro are now based in Colombia and have claimed involvement in a drone attack on the president last year, there is little evidence that such operations are being prepared at the moment.