GENEVA (AFP) - US calls for Venezuela to allow more aid into the country are just a smokescreen to cover a "foreign invasion", Caracas's ambassador to the United Nations in Geneva said Tuesday (April 16).

US Secretary of State Mike Pompeo on Sunday urged Venezuelan President Nicolas Maduro to open the border to allow humanitarian aid into the crisis-hit country - and also to step down.

"We of course can never accept attempts to use humanitarian support to promote a foreign invasion in my country," Ambassador Jorge Valero told AFP in an interview.

"For that reason we reject strongly the attempt of the US to use this so-called humanitarian aid as a mechanism for an intervention," he added.

Maduro closed four border bridges connecting Venezuela and Cucuta, Colombia on Feb 22, after the US and some 50 other countries branded him illegitimate and recognised opposition leader Juan Guaido as interim president.

Meanwhile, Venezuela is suffering an economic collapse and is struggling with shortages of food and medicine and the exodus of millions of people.

Humanitarian aid has been a defining issue in the power struggle between Guaido and Maduro. 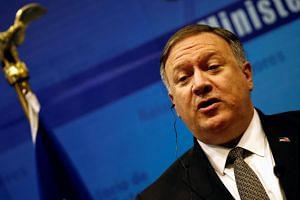 Mike Pompeo says all US diplomats have left Venezuela

Valero insisted that his country was open to humanitarian support from "friend countries", and pointed to an agreement announced by Maduro last week to allow the Red Cross to work with UN agencies to bring in aid.

A first shipment, including medication and medical supplies, arrived on Tuesday, an official told AFP in Caracas.

But Valero charged that Washington's insistence on the need to send more aid was disingenuous.

"We consider that (this is) a pretext for a foreign intervention in Venezuela," he said.

Like Maduro, Valero denies that Venezuela is suffering from a humanitarian crisis, instead blaming large-scale US sanctions for the country's economic woes.

"The sanctions produce death," he insisted.

More than 2.7 million Venezuelans have fled the country since 2015, according to the UN.

But Valero maintained that the exodus corresponded with a more aggressive US policy.

"This recent movement of people from Venezuela beyond the borders is a direct consequence of the economic war and sanctions against Venezuela," he said.

The ambassador said he hoped that UN rights chief Michelle Bachelet, who has also voiced concern about the impact of the US sanctions on regular Venezuelans, would soon visit the country.

He said a team of UN rights officials who travelled to Venezuela to assess the feasibility of such a visit had told him they would recommend that she make the trip.

Bachelet's office confirmed that "the team has been briefing the High Commissioner and discussions are ongoing about a potential visit." Valero also slammed US efforts to snub Maduro's representatives at the UN, especially before a Conference on Disarmament (CD) in Geneva.

Washington has repeatedly called for Guaido's envoys to replace Maduro's officials at international bodies, including the CD, where Venezuela is to take over the rotating presidency next month.

"The position of the US diplomacy in the CD is ridiculous," Valero said, suggesting that the US instead could allow Guaido to be its representative at the CD.

"I invite the United States government to put the puppet in (its) seat," he said.