For Joseph Schooling, 2018 was memorable not just because he won two Asian Games golds five months after finishing his final National Collegiate Athletic Association (NCAA) Division I campaign without a medal.

It was also significant because of a "gradual feeling" around October or November, which led to this realisation: His competitive fire is back.

Revealing that he is now back to feeling annoyed whenever anyone tries to beat him in practice, he told The Straits Times: "Before it was kind of like, 'I really don't care, go for it dude', but now it's like, 'OK, this does not fly well with me'.

"I feel a fire within me. My mind and body were telling me it's time, I'm ready to start my push towards Tokyo and all the meets on the way.

The 23-year-old feels he has built enough momentum towards defending his 100m butterfly Olympic title in Tokyo in 2020.

He said: "I'm happy with the progress I've made since the Olympic year through the Asian Games and now.

"Physically, I feel the best ever. The big thing is getting school out of the way and now my goal is to see how good I can actually become."

2018 has also taught him a valuable lesson he feels has made him mentally stronger: That life does not always turn out as expected.

Reflecting on his medal-less NCAA outing after which he turned professional, he recalled having trained "the hardest ever" for it.

He said: "You put your body through crazy things day in and day out and you have this huge expectation in your head and, when you don't hit it, it's terrible.

"So if you go through things like that, you kind of figure out how to learn to view it in a different way and move on."

Move on is what he did. In Jakarta last August, he retained his 100m fly title in an Asiad record of 51.04sec. He then went one better than his 50m fly silver in 2014 by winning the event the next day.

It is not the first time Schooling, whose 2018 achievements have earned him a nomination for The Straits Times Athlete of the Year award, has successfully moved on from a setback. 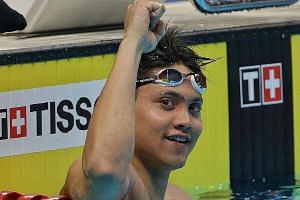 He once described the 2012 Olympics as the "lowest point" in his life, and almost gave it all up.

In London, he was rattled by a last-minute equipment change before his 200m fly heat and eventually clocked more than two seconds off his personal best, falling short of his semi-final target.

Explaining how that experience helped last year, he said: "I just used the same way you get over anything. Put that behind you, find certain things or outcomes you weren't happy with, use that to motivate you to go to practise and swim faster.

"It's the same thing on repeat, just using different scenarios and different situations."

His mother, May, is proud of the way he persevered through difficult times last year.

She said: "It was tough getting back and he had to put in a lot of training to lose the weight.

"But he put his mind to it, he really focused on what he wanted to do and we can only support him in whatever he does.

Her son has never been comfortable losing. Perhaps this discomfort is what will lead him back to the pinnacle of the sport next year.