Delivery driver Khairul Kamal, 25, considers his toddler's health and well-being to be his main concern, and hopes a new initiative in his neighbourhood in Woodlands will help young parents like him be more well informed.

M³@Town, which brings Malay/ Muslim volunteers and community leaders together to support residents in areas of concern to them, was launched in its eighth town islandwide yesterday.

Mr Khairul, whose son is turning three, said his biggest challenge is managing his son's health, which includes knowing what food is good for the boy. "Having such a programme can help us learn more," he told The Straits Times.

At last year's National Day Rally, Prime Minister Lee Hsien Loong called for more Malays to contribute to the community through M³, noting how collaboration between Malay/Muslim organisations and the Government can help to tackle challenges faced by the community.

Focus areas differ for each town, with the spotlight in Marsiling-Yew Tee, for example, being on marriage, parenting and early childhood education.

Announcing the Woodlands initiative at a community event for new and prospective parents, Senior Parliamentary Secretary for Home Affairs and Health Amrin Amin noted the importance of financial preparedness, saying: "Especially given this uncertain economic climate, we want to prepare our people to ensure that (they) spend money wisely and have good jobs."

Especially given this uncertain economic climate, we want to prepare our people to ensure that (they) spend money wisely and have good jobs. 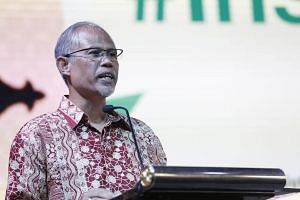 Muslims in Singapore a model for those in other countries: Masagos

Muslims should continue to build relationships with all people to maintain social harmony: Masagos

The initiative also aims to harness potential within the Malay/ Muslim community, given its growing number of professionals, Mr Amrin, an MP for Sembawang GRC, told reporters at Woodlands Galaxy Community Club. "We'd like to involve them in uplifting the community."

The 23 members of M³@Woodlands include lawyers, educators as well as various professionals, managers, executives and technicians, who will look into programmes for residents at different life stages.

Dr Noorul Fatha As'art, who is leading M³@Woodlands, said: "One of the programmes Mendaki has been working with us on teaches families how to cope with finances as well as appropriate financial skills."

Dr Noorul, who is chief medical officer with the Singapore Prison Service, added that this will be expanded to the rest of the GRC, noting that programmes by various organisations can be disparate and the aim now is to bring stakeholders together and avoid overlaps.

There are eight M³@Towns in Singapore. Their focus areas include:

• Pasir Ris-Punggol: Focusing on education and social engagement for the Malay/Muslim community, giving targeted support to those in need.

• Jurong: Outreach to the Malay community, especially to youth and low-income families.

• Marsiling-Yew Tee: Boosting outreach to individuals and families, particularly in the areas of marriage, parenthood and early childhood. It also aims to empower and mentor its youth.